Treatment Of Cancer Of The Uterus

The gynecologist/oncologist will include information about the histology, the grade of the tumor and the cancer stage before the ideal treatment modality and/or combination can be recommended for the patient. Certainly, a large body of literature exists from many clinical trials.  Because of this treatments and survivals are now about 15 to 20% better for most stages of the cancer in comparison to the early 1980’s.

In fact, one such study involved a group of patients with uterine cancer where researchers separated them into grades and these women received surgical treatment in combination with or without radiation.

It is clear from this that there was a 15% survival advantage for grade 3 tumors with radiation therapy of the pelvic lymph nodes. Notably, radiation neutralized  the high number of invisible lymph gland metastases in grade 3 tumors and improved survival.

Similarly, there were studies regarding recurrence rates after hysterectomy for grade 1 patients. They only received surgery. For example, in one such study researchers followed patients who developed isolated high vaginal recurrences. In this case they treated them with a combination of external beam radiation and brachytherapy (see below) and then followed them for 5-year survival studies. Notably, the tumor size at the time of the recurrence determined the longterm survival. In this case the table shows that there was a much better survival with the smaller lesions than with larger lesions. Certainly, both groups received radiotherapy. In this case oncologists incorporated these type of observations into the present day treatment against uterine cancer.

By all means, treatment against uterine cancer has become complex as so many variables have entered into the equation. Most specialists treat early cancer like stage IA and IB with surgery only, although some authorities err on the cautious side and cover with some form of radiotherapy.

As the table below shows, stage IC and stage II do best with a combination of surgery and radiotherapy. Specialists treat stage III and IV usually with radiotherapy alone because surgery or combination surgery and radiotherapy did not yield better survivals. Specifically, there is a subgroup of patients with stage IV disease who will benefit from a radical surgical procedure called ” pelvic exenteration”. They have to be in fairly stable condition for this surgical procedure, in which all of the visible cancerous tissue is removed in an extensive debulking procedure. Subsequent to that radiotherapy and chemotherapy to prevent recurrence is given. 5- year cure rates of 40% to 50% have been achieved this way!

With this in mind, surgery consists usually of an abdominal hysterectomy and removal of both fallopian tubes and ovaries (called”bilateral salpingo-oophorectomy”). In addition, the oncological gynecologist also removes samples of pelvic and paraaortic lymph glands. All of the material is sent to the pathologist who will report back, which of the tissues contained cancer cells. This data is needed in order to decide whether radiotherapy is needed. 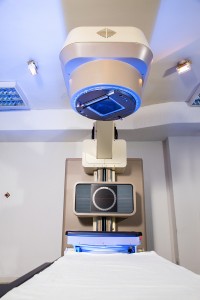 Treatment Of Cancer Of The Uterus (External beam therapy)

For one thing, radiotherapy is delivered in two ways. External beam therapy delivers radiation through the skin in overlapping beams that are mostly concentrating in the uterus, pelvic and paraaortic lymph gland areas.

Notably, using spatial computer models radiation doses can be accurately delivered in differently shaped pelvic cavities. and can be modified according to body size and shape. Equally important, this is supplemented by a direct dose of radiation from local “brachytherapy“. With this form of radiotherapy a device, which has an “arm” (the name “brachy” means arm) that fits into the uterus and another piece that fits into the upper vagina, is placed for several hours until a certain dose has been delivered to the tissues.

That is to say, between these two delivery methods the radiation specialist can deliver curative doses of radiation with a minimum of side effects. The older technique with radioactive radium has largely been replaced in the 1980’s with radioactive caesium (137-Cs), which has less side-effects than radium and is easier to apply. About 2% of patients experience major side effects such as bladder, rectum or gastrointestinal scarring. However , on the other hand this is considered a very acceptable risk given the alternatives of not treating the cancer.

It is important to realize that uterine cancer is not very sensitive to chemotherapeutic intervention. However, in spite of this  multidrug combination therapy when combined with radiotherapy and surgery has made some difference in survival data as mentioned above. For one thing, there are still tremendous immunosuppressant side-effects that need to be overcome. For example, some future approaches might include monoclonal antibodies directed against tumor markers (Ref. 2).