In any event, diagnostic tests such as a bone scan and general cancer diagnosis has to be done to establish the stage the cancer is in. Obviously, a bone biopsy can establish the histopathology of the cancer, which is helpful in finding the primary cancer location.

Unfortunately, on balance it is rare that only a single bone metastasis is found and it is more common that a bone metastasis is a sign that the original cancer is spreading into the rest of the body. In essence, there might be cancer cells that have spread to several vital organs including several locations of the bone anywhere in the body.

Likewise the first symptom of a bone metastasis may be a localized bone pain that prompts the physician to order X-rays, which show a lytic lesion (a calcium depleted bone metastasis). In this image there is a large area of lack of bone in the upper posterior end of the tibia bone in the knee of this patient. This is a lytic metastasis where the bone has been destroyed by cancer tissue from elsewhere in the body. Equally important, in contrast an osteoblastic metastasis where the metastasis is producing bony substance will show up as a hyper-intense focus on X-rays compared to the normal other bone. All in all, bone scans are more sensitive and detect bone metastases earlier.

Bone pain is usually the symptom that is first pointing to a bone lesion. Sometimes a pathological fracture can occur just below the hip joint and may be the first clue that there is a metastasizing cancer in the body. 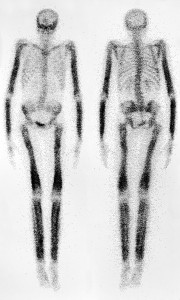 Generally speaking it is not a good prognosis to have even a single bone metastasis as it indicates a stage IV of cancer (the worst stage of any cancer). Sometimes by treating the primary cancer, treating the bone metastasis with radiotherapy and helping the body to fight the remainder of the cancer, a few cancer patients are cured or get into a longer remission. Cancer chemotherapy occasionally helps in that regard as well (Ref. 8).