Staging Of A Melanoma

As in other tumors staging of a melanoma is important in the beginning of the treatment as the treatment is different depending how advanced the melanoma is. The American Joint Committee on Cancer has come up with a generally accepted staging system. Briefly, there are 4 stages with stage I and II having each two subclasses. This way there are a total of 6 categories (Ref. 1) as is shown here.

Stages of melanoma (according to the American Joint Committee on Cancer)

Large numbers of patients have been followed throughout the world by various Cancer Control Agencies. Cancer survival rates with patients who were treated according to the latest generally accepted protocols for melanoma and then followed along could be accumulated as follows (Ref. 1 and 3): 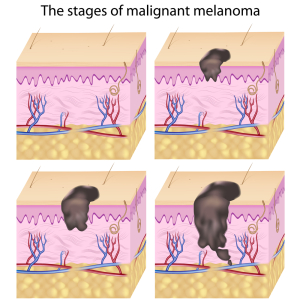 Staging Of A Melanoma

The lesson to learn from this is that education regarding detecting the early stage of melanoma and instituting early melanoma treatment can change this previously vicious cancer into one with 90% to 100% survival rates over 10 years.