This fungal infection was first described in southern India, where in the region of Madura people who walked barefoot came down with a local fungal/bacterial infection termed “Madura foot”.

We now know that they had sustained a small skin cut when walking barefoot, which was super-infected by a number of pathogens. One of these pathogens was the Nocardia asteroides (thanks to depts.washington.edu for this image).

This in combination with bacterial super-infections that cause a festering wound of the foot is what was leading to ulcerations and eventually after years of neglect to gangrene and death. This condition would never be allowed in industrialized countries to go on that long without treatment, but in inner cities the occasional such case can be found among the homeless and in poor AIDS patients who run out of options. Since the AIDS epidemic there are also more resistant pathogens around and mycetoma is possibly seen more often these days for this reason.

In the beginning there might be just a small pimple where the infection started. This then develops into an abscess that may break open, then heal over, only to eventually develop into a fistula with a draining opening and a festering wound in the subcutaneous skin of the foot. Here is an image of a Madura foot (thanks to www.dermaamin.com for this image), which is due to mycetoma.

The body reacts by forming scar tissue around this, but the infection eats its way deeper and deeper into the foot. This is amazingly pain free as the superficial nerve fibers are eaten up by the granulation tissue and pain impulses are not generated. Over months and years of not treating the Madura foot the infectious process extends deeper into the tissue of the foot infecting muscles, tendons, ligaments, bones and joints. Initially the patient may just limp a bit. Later as the muscle function is affected, there will be muscle atrophy on the affected side not only in the foot area, but also in the lower leg and in the thigh area. Eventually the patient can no longer walk. Grotesque swelling and tissue deformities around the affected area occur. Thick bloody discharge and pus ooze from the unsightly infected mass of the affected foot. The infection tends to stay local for a long period of time, but eventually it sheds into the blood stream and the patient dies very quickly of septicemia unless the infection can be stopped in a heroic amputation surgery coupled with massive antimicrobial therapy.

The key is to diagnose early before permanent damage is done to the foot and amputation would be the only hope for rescuing the patient. Fluid from the discharging wound should be cultured for bacterial and fungal pathogens. Slides should be stained for bacteria and fungi and studied under the microscope by a microbiological expert. X-rays, CT scans, bone scans and blood tests are all helpful to establish the depth of infection. 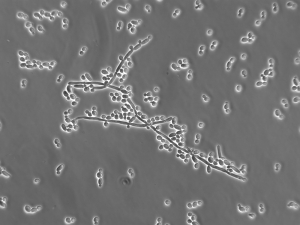 When all the tests have come back, treatment would be given directed at the pathogens isolated. If Nocardia asteroides is isolated, this is treated with trimethoprim-sulfamethoxazole (brandname: Bactrim).

For people allergic to sulfonamides the alternative would be ceftriaxone, tetracycline or imipenem. Several fungal infectious agents respond to itraconazole (brand name: Sporanox) and ketoconazole orally or amphotericin B intravenously. After this initial clearing of most of the infection, surgical debridement might be necessary, followed by further prolonged antifungal and antibiotic therapy. In some cases, where the disease has gone too deep and osteomyelitis has set in, the only alternative is amputation, particularly in cases where the immune system is suppressed (AIDS, malnutrition, cancer) (Ref. 1, p. 1224).