Aspergillosis is an infection with a mold from the  Aspergillus family, which is very common in our environment.

For instance spores (actually called “conidia”) are found in compost heaps, in air conditioning ducts and heating systems, in insulating materials of walls and in dust particles. In a patient who suffers from bronchiectasis where there are large infected air pockets in the lungs, these particles will sprout into thread-like “hyphen”, which will eventually turn into a fungus ball.

This is called “aspergilloma”. Such Aspergillus infection tends to occur in chronically ill patients with cancers, tuberculosis, chronic bronchiectases from chronic bronchitis, and other chronic lung diseases.

Symptoms depend very much on where it starts. The primary lesion could be in the sinuses and follow a chronic sinusitis that was treated with a lot of various antibiotics. Instead of sinus pains being relieved, the symptoms of sinusitis would then just carry on and the ENT specialist, to whom the patient would be referred would likely make the diagnosis by imaging studies and cultures. In a patient with chronic ear infections along the lines of swimmer’s ear (external otitis) it can be that in a similar vein the original bacterial infections gives way to aspergillosis after extensive antibiotic therapy. In this case the symptoms would be that of external otitis with ear pain and copious amounts of material that plug the ear canal. Upon suctioning and culturing it turns out that this material contains Aspergillus species. From the primary focus it can also lead to disseminated aspergillosis, in which case the liver, the brain , the kidneys and other organs get infected. This is life threatening and is often fatal.

If the primary lesion is in the lungs, X-rays and CT scans can be obtained and bronchoscopy with subsequent culture can be arranged by the specialist (=respirologist). With sinus infections CT scans can be ordered, which may show typical changes characteristic for aspergillosis. Endoscopic tests (rhinoscopy) can be used to obtain material for fungus culture and direct staining for aspergillosis. Disseminated aspergillosis is largely a clinical diagnosis in the setting of high risk and the presence of a primary aspergillosis lesion. Rapid serological tests are unreliable. 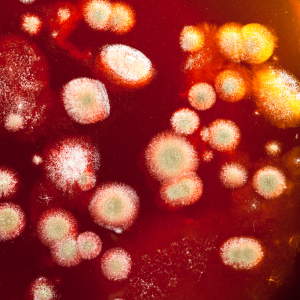 Treatment depends on the clinical situation and needs to be directed by a specialist in the field where the primary lesion is located. Otherwise and infection specialist should be consulted for cases of disseminated aspergillosis. The problem is that amphotericin B is toxic to the kidneys. Other antifungal treatment might at times be added, but there is a danger of toxicity developing and an infection specialist needs to supervise the therapy, often in a hospital setting because of the underlying life threatening conditions (Ref. 1, p.1222).