This is a fungal infection, which is caused by Coccidioides immitis. It is also known under the names “valley fever” or “San Joaquin fever”).

It occurs in the Southwest of the US (Texas west of El Paso, New Mexico, Arizona and the central valley of California, thanks to www.medscape.com for this image). It also occurs in Mexico, Central America and Argentina. Infection is due to inhalation of dust containing the spores of C.immitis. There is a complicated cycle the organism goes through. The endospores are inhaled into the human host.

There is a certain incubation time, which makes it often confusing in the traveling public to know exactly where this fungal infection came from. Similar to other inhaled fungal infections the spores get activated in the lungs by the temperature shift from the outside to the body temperature. With primary coccidioidomycosis the spores transform in the lungs into large “spherules”, which contain multiple endospores. As the spherules enlarge there comes a point where they rupture and the cycle repeats itself with many more new spherules growing. The lung tissue reacts to the foreign pathogen by forming inflammatory granulation tissue around the areas where spherules are present. Eventually this forms scar tissue and leads to cavities similar to tuberculosis of the lungs, which may be visible on chest X-rays. Eventually, like with blastomycosis or histoplasmosis the disease can change from the primary form, which is confined to the lungs, to a disseminated form, called progressive coccidioidomycosis. This usually requires a weak immune system such as in AIDS patients , in chemotherapy patients who are treated for cancer, or in certain ethnic groups (Filipinos, black and native Americans, Orientals and Hispanics) who are genetically more susceptible. Similar to the other fungal disseminated infections the disease in this case is spreading into the lymph glands, spleen, bone marrow, vital organs including the brain.

Symptoms in the beginning of the primary coccidioidomycosis may be absent. However, as the disease is getting established there likely will be flu-like symptoms with a fever and cough. There can be chills, coughing up of blood and chest pains. Some patients develop an allergic reaction to the fungal infection, which manifests itself as redness in the eyes (conjunctivitis), joint pains (arthritis), a skin rash with red marks of multiple shapes (erythema multiforme) and a painful swelling over the shins, called erythema nodosum.

Symptoms of progressive coccidioidomycosis (thanks to www.nlm.nih.gov for this image) can occur only months or years after the primary infection, which  happens more often in men and is frequently associated with AIDS or other severe immune deficiencies. Weight loss and shortness of breath from lung fibrosis due to the long standing primary form of the disease are common. This is associated with Bluish discoloration of the skin (cyanosis), shortness of breath and a chronic cough with phlegm consisting of yellow-greenish mucous mixed with blood. Other symptoms are dependent on where the disease has spread. Inner organs such as liver or kidneys can get infected, but it can also spread into the brain (encephalitis) or into the membranes around the brain (meningitis). Bones and joints or the skin may also get infected. Usually by that time the patient is extremely ill and would have been examined by a physician in the hospital setting. An infection specialist would be consulted who would have made the diagnosis, if that disease was not already diagnosed before. 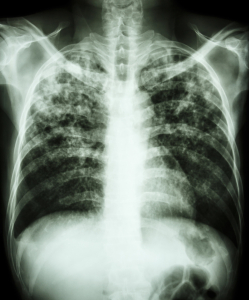 There are several diagnostic tests to diagnose coccidioidomycosis. Body fluids, phlegm or tissue specimens can be set up for culture and the laboratory can report the result as positive or negative for C. immitis. Another possibility is to stain tissue samples or samples of body fluid directly with special stains and look under the microscope for spherules containing endospores, a very specific appearance, which will make the diagnosis, if present. Finally, a blood test where IgG antibodies are measured using a complement fixation test, is very useful in detecting the disease, as the titers can predict how active the disease is (see table, based on data from Ref.1, p. 1215).

In immunosuppressed patients the titers may be lower than would otherwise be expected.

It might appear as if they are confined to the lungs only, but the clinician has to then rely on clinical judgment and a number of more tests in order to know whether the immune system is weak. With neurological signs of meningitis a CSF sample is taken by lumbar puncture and this is also examined with the antibody titer test. This is a better indicator (it is more sensitive) than to culture CSF (could be false negative).

Other tests would involve X-rays such as CT scans, bronchoscopy and biopsy.