This fungal infection is caused by Sporothrix schenkii (thanks to biomedical.med.sc.edu for this microscopic image), a pathogen that is found in garden plants such as rose bushes, moss varieties, barberry bushes and mulches.

The spores enter the body via cuts or abrasions of the skin, which is the reason why horticulturists, gardeners, forest and farm workers are at a higher risk to get this infection. When in the body, this pathogen causes a nodule that ulcerates and does not want to heal.

Instead the pathogen spreads through lymphatic drainage to regional lymph glands that in turn get infected and lead to festering deep sores. These fester their way to the surface causing chronically draining abscesses and ulcerations. Untreated the patient would die from bacterial sepsis and systemic fungal infection.

The symptoms center around the site of primary infection where there first is a non-tender pimple like primary lesion where there was a puncture wound on a foot or hand.

A few days or weeks later the lymphatic vessels and the regional lymph glands of the area are swollen and when not too far from the surface the overlying skin will redden, abscess and ulcerate. Bacterial superinfection tends to set in. The strange part perhaps is that even after weeks of this no systemic symptoms such as fever or malaise occur and that systemic spread tends to not happen from the skin or lymphatic infection with sporotrichosis. On rare occasions there are a few cases of systemic sporotrichosis where many joints are infected with symptoms of arthritis, with bone infection, occasionally also liver, kidney and meningeal membrane infection (meningitis). In patients with pre-existing chronic lung disease inhaling spores may occasionally cause pulmonary sporotrichosis, which can then lead to infiltrates in the lung tissue and cavity formation, which has to be separated from tuberculosis.

The only reliable test is to culture samples from the site where the active infection is for sporotrichosis. Other similar looking lesions from other diseases such as tuberculosis, nocardiosis or spider bite injuries have to be ruled out. 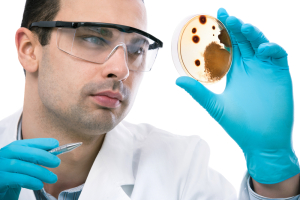