Cryptococcosis is a condition that is also known under the alternative diagnostic names “tolurosis” or “blastomycosis”.

It is a fungal infection, which is transmitted by Cryptococcus neoformans that is found in soil worldwide. Some patients are very sensitive to this pathogen, particularly AIDS patients, but also patients with Hodgkins lymphoma, patients on longterm high doses of corticosteroids or sarcoidosis patients.

The encapsulated yeast form of C. neoformans enters the body through inhalation of dust contaminated with the pathogen. In the lungs of a healthy host a self-limited cryptococcal infection would ensue. However, in a patient whose immune system is paralyzed such as with AIDS a severe pneumonia will develop. The infection then spreads throughout the system with skin lesions (thanks to www.globalskinatlas.com for this image), subcutaneous nodules and disease in liver, kidneys, spleen, joints, bones, prostate and other organs. Even the central nervous system is often affected in AIDS patients with cryptococcal meningitis.

During the acute lung infection phase symptoms would include coughing, chest wall pain and difficulties breathing.

Skin involvement looks quite varied with pustules, papules, acne like and even with basal cell cancer-like appearance of lesions. This is shown here with two images, before and after treatment (thanks to www.scielo.br for this link, scroll down). If the physician is in doubt what the lesions are, one or two of them could be biopsied for analysis by the pathologist. Single lesions in bone, abdominal organs or kidney may not give any symptoms, because they are pain free and are self-limiting in a person with a normal immune system. Headaches, blurred vision, behavioral changes, confusion, agitation and depression can all be symptoms of a beginning cryptococcal meningitis.

Mostly the diagnosis is made by culture from body fluid samples such as urine, blood, phlegm or cerebrospinal fluid (CSF). Smears of biopsy specimens can be examined after special staining techniques by an experienced laboratory physician or technician.

The characteristic encapsulated budding yeasts of C.neoformans with cryptococcal capsular polysaccharide have a unique appearance that can readily be distinguished from other pathogens by the experienced observer. Finally there is a latex test for capsular antigen, which is a specific blood test, particularly, if the titers are higher than 1:8. For pulmonary lesions X-rays, CT scans, bronchoscopy with biopsy are employed to lead to a diagnosis. With any palpable lesion such as in skin or in the subcutaneous tissue skin biopsy would be considered. With meningitis lumbar puncture to obtain CSF has to be done in order to diagnose the condition. The biopsy material shown here shows large, pale cells, which are the Cryptococcus neoformans fungal cells invading the lung tissue. 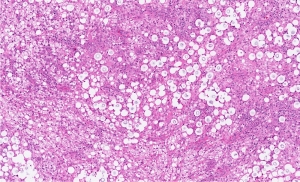 Treatment has to be individualized according to the situation. It depends whether the patient is immuno-competent or immunocompromised as in an AIDS patient.

The patient with a normal immune system may not need treatment for a localized lung infection with cryptococcus, as it would often be self limiting. However, in order to be certain that the assumption of “localized disease” is correct it is wise for the physician to examine and culture the CSF (to rule out meningitis), the urine (rule out kidney involvement) and examine the skin for any abnormal lesions. Patients with a normal immune system can be treated for mild disease with fluconazole (brand name: Diflucan) orally. More severe infection would have to be treated with flucytosine (brand name: Ancobon) orally, but side-effects (kidney and bone marrow toxicity) has to be monitored. Some centers can measure flucytosine levels, which would be desirable to avoid toxic levels. Serious disease is treated with intravenous amphotericin B in combination with or followed by oral flucytosine.