Knowing the facts about growth behavior regarding cancer of the cervix helps in being proactive about cancer screening with the yearly Pap smear.

The medical profession adopted this test on a larger scale in the 1950’s and 1960’s. It consists of two parts: a Pap smear and a bimanual pelvic exam. With breast cancer being so frequent physicians have added a third part, namely a breast exam, to rule out early breast cancer. This is good cancer prevention.

The Pap test (or Pap smear) is done in the “lithotomy position” where the woman lies on her back and has her legs supported in stir-ups. The physician enters a metal or plastic “speculum” into the vagina, so he can visualize the cervix.The speculum consists of two elongated blades that are spread apart so that the vaginal walls are held apart. This enables the physician to inspect the surface of the cervix. The physician will then touch the surface of the cervix with a slim wooden spatula and gently remove some of the surface cells of the cervix and smear them onto a small rectangular glass slide. He then takes another sample of cells with a cotton swab from the cervical canal in order to screen for a hidden cancer that might hide inside the cervix.

The physician smears this sample of cells either on the same slide, if there is a division, or else on a second glass slide. The two smears are sent to the clinical pathology lab for analysis. It might take several weeks before the results come back (unless it is rushed in highly suspicious cases).

Here is a comparison of the old terminology and of the new terminology:

In the past physicians in the US used another popular classification system, the Bethesda system. However, the terminology led to confusion, as world wide the World Health Organization system was in use.  The same term suddenly meant a class III cancer in the old Pap terminology. On the other hand, there was not enough differentiation among the critical class III Pap group. In the past this simply had the name “low grade” or”high grade”. Some physicians still use the old Pap terminology, but add in class III the remark: “with mild dysplasia”etc.

In a trial published in the New England Journal of Medicine 2007 where a Pap test was done alongside testing for HPV (human papilloma virus), it turned out that the HPV testing was twice as sensitive as the Pap test in picking up abnormalities. As HPV accounts for most abnormal Pap tests in the “atypical cells” to the various degrees of “dysplasia” (old class II and III classification), it is now possible to triage these women differently as many of these women will not need to go on for biopsy or colposcopy immediately.

They see a gynecologist who will do treatments according to the findings and history. This may involve repeat testing in 3 to 4 months, cryotherapy with liquid nitrogen or colposcopy and biopsy in the more suspicious lesions. The physician still has to do Pap test screening (plus HPV testing) in younger women who received vaccinations against HPV in high school as the vaccine does not cover for all of the carcinogenic HPV types.

The second part of the Pap test is, as I indicated above, a bimanual examination. With the patient still in the lithotomy position the physician will ask the woman to relax her pelvic and abdominal muscles while he/she examines with two fingers of the one gloved hand through the vagina and at the same time with the other hand through the abdomen. The objective of this bimanual examination is to determine the size and consistency of the cervix, the uterus and both ovaries in rapid succession. The physician will also attempt to feel pelvic lymph glands in the case of established cancer. Gynecologists also always do a rectal examination at the end. This detects any cancer in this region or any cancerous pelvic lymph glands. Not many general practitioners tend to do the rectal examination as it can be uncomfortable for the woman. 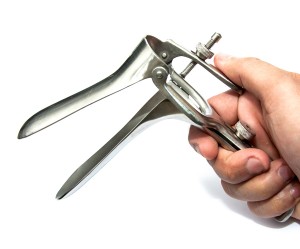 Bimanual pelvic examination the only prevention of ovarian cancer

The bimanual pelvic examination done on at least a yearly basis is the only prevention for ovarian cancer. Expressed more pointedly, it may be the only step between prevention and death for a woman who develops ovarian cancer (see chapter on ovarian cancer). If the physician detects a lump of the ovary during the Pap test (part 2, bimanual exam), the physician can refer her to a gynecologist. He may remove the affected ovary. This woman in all likelihood will live (95% 5-year survival for stage I cancer of the ovary). If the physician misses the cancerous lump in the ovary, cancer cells shed into the abdominal cavity. In other words, the window of opportunity to save a life is lost (only 10% to 30% live for 5-years).

The physician needs to do a yearly breast examination to screen for breast lumps as this helps in the prevention of breast cancer. Some women are at a higher risk of developing breast cancer. The physician should discuss this with the patient. It may be that these women at a higher risk need mammograms done more often. Here is a web site that teaches you how do do a breast self examination (scroll down).