Historically radiotherapy has played an important role in the treatment of cervical cancer and has led to remarkable improvements in cancer survival.

However, surgical techniques have also played an important role in the early stages of cancer treatment. Lately, as we shall see below, there is a tendency to somehow combine both methods to the benefit of the patient with cervical cancer to achieve longer survival rates. Chemotherapy also has made some differences for advanced disease.

But there are limitations because the dosages that are curative are so toxic that bone marrow suppression from the chemotherapy often becomes the limiting factor.

Here is a typical 5-year survival table, which is based on several large trials and modified from data from Ref. 2.

The following remarks can be made regarding the various treatment protocols:

Radiation therapy for up to stage IIB 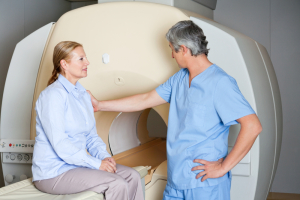 According to Ref. 1 recurrences after an initially successful therapy had the following 5-year survival: