For one thing, when there is a forest fire we hear of fire “behavior”. In fact, cervical cancer too, has a certain behavior in its growth, which is called the “biology of cervical cancer tumor growth”.

Truly, after contact with a carcinogen there is an incubation time of several years as explained elsewhere before cancer in situ shows up, the very first step of cancer. However, during the later stage of incubation there are cytological changes in addition  that alert the pathologist and physician to watch more closely: the atypical squamous cells and the cervical dysplasia.

Notably, there is mild, moderate and severe dysplasia. Many authors treat the “severe dysplasia” synonymous to “cancer in situ”. Certainly, this is what the pathologist sees in a Pap test sample.

The next big step is for the cancer in situ to decide to invade the cervical tissue. We describe this below as the various “cancer stages” in cervical cancer development. Cancer of the cervix tends to invade locally first, then it grows along the cervix up into the body of the womb (=uterus) and from there it spreads in several directions. It goes up into the fallopian tubes and into the body (=abdominal) cavity metastasizing into the liver. 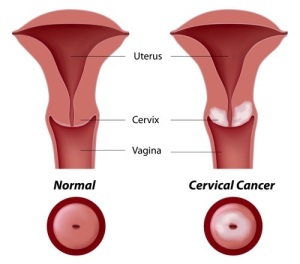 Finally, the cancer cells can travel along the main lymphatic vessels into the circulatory system. At that stage all of the body organs are at risk of being attacked with metastases. All through this growth of cancer the cancer cell type remains the same, in other words it still looks like cervical cancer. However, as time passes, the rapidly dividing cells loose some genetic material and the growth behavior becomes much more aggressive and invasive. This is the reason why at the end stage it is more and more difficult to eradicate these clones of cancer cells that are resistant to treatment.