In the first place, the reason I stressed prevention so much above (yearly Pap smear) is that there are no early symptoms of cervical cancer.

This in fact is similar to prostate cancer in the male. In this case, once there are symptoms of pain or bloody discharge, it often is too late to be able to offer effective therapy.

It is important to realize that at times there might be a coexisting vaginal discharge from an unrelated problem. In the process of a work-up by the physician this could lead him to recognize that there is also a cervical cancer.

Symptoms of a larger cancer

With a larger tumor there might be superinfection leading to a smelly, pus containing vaginal discharge (=purulent discharge). Without infection the tumor can leak serum and the discharge is now called “serosanguinous” in nature (this would be like the reddish watery fluid of deep-frozen meat that is being thawed). There can be bleeding abnormalities, either that there is unexpected bleeding between two regular periods, or that there is more bleeding at the regular time. Symptoms relating to the urinary tract and rectum or pain in the pelvic area are all late symptoms of an invading cancer of the cervix. The cancer will cause pain wherever it spreads to. 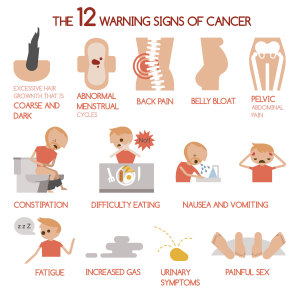 Low back pain can be caused from nerve root compression by tumor mass. Flank pain on one or both sides can be caused from obstruction of the ureter (connecting tube between kidney and bladder) by spreading cancer into the pelvic or paraaortic lymph glands resulting in a ballooning kidney (=called “hydronephrosis”). This is an emergency as quick ways have to be found to save the woman from kidney failure and coma. In the late stage of cancer of the cervix there might be blood in the urine (=hematuria), there might be agonizing defecation (=rectal “tenesmus”) or rectal bleeding from direct invasion of the tumor. Secondary systemic cancer symptoms such as vomiting, rapid weight loss and depression are often apparent in the later stages.