Here I am discussing the histopathology of cervical cancer.

First, 85% of cervical cancer is “squamous cell carcinoma“, as the pathologist classifies them. For comparison here is a normal histology finding of the cervix.

This is the area of the cervix that is visible to the physician’s eye when he does a speculum examination and normally this is covered with cells called “squamous cells”. At times the lining of the cervical canal, which has adenoid glands, grows a bit out of the canal onto the outside surface of the cervix. Second, when this tissue turns cancerous, the pathologist diagnoses “adenocarcinoma“, which happens in about 12% of all cervical cancer cases.

Third, the remaining 3% of cervical cancer is diagnosed by the pathologist as “adenosquamous cell carcinoma“. As the name says, they are a mixture of both malignant adenocarcinoma and malignant squamous cell carcinoma. These cancers are what the pathologist calls “poorly differentiated carcinoma“, meaning that they are fast growing tumors with a cancer survival rate that is very poor. 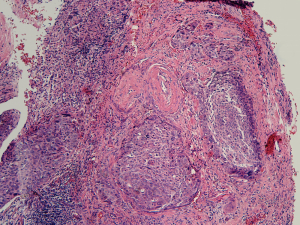