Why is it so important to go through this detailed, lengthy staging of cervical cancer procedure?

As mentioned in other cancer chapters the cancer survival rate is determined by the initial stage of the cancer at the time of the diagnosis.

As we will see later, different stages of cervical cancer have to be treated differently to get the best cancer cure rates. We have also learnt in the past that for instance to miss pelvic or paraaortic lymph gland metastases at the beginning decrease survival chances significantly.

Many patients now have cures when initial radiotherapy is combined with surgery. So, staging involving the above diagnostic tests makes sense. Here is the FIGO classification:

IIA : Ca.* invades beyond uterus, but not to pelvic wall

IIB : same as IIA, but supportive ligaments are invaded

IIIB : Ca. extends to pelvic wall, might cause hydronephrosis

IVA : Ca. extends beyond pelvis, or into bladder or rectum

The overall survival figures below under “treatment” are dependent on how far spread the cervical cancer was when it was diagnosed. There is a direct relationship between the invasion of the cancer outside of the cervix and the eventual survival. 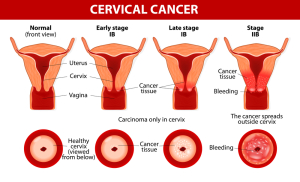 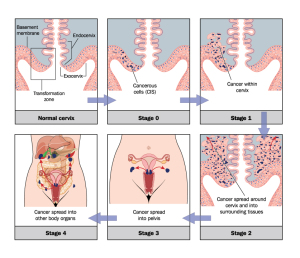 This illustration shows that the probability of developing wide spread disease with cancer of the cervix is much higher in later stages than in early stages. Again, this figure also emphasizes how important regular screening methods are for women to catch the dysplastic Pap test changes long before the woman becomes a “statistic” on one of these tables. It also shows that treatment in an earlier stage is much more successful than with later stages.