Trichomonas infection (called “trichomoniasis”) of the vagina and the male genital tract is caused by a one cell protozoon that is equipped with a little tail that is used in whipping motion to propel itself forward.

It is called Trichomonas vaginalis (thanks to www.ucm.es for this image) and is transmitted from person to person by sexual contact. After the initial symptomatic phase of the male the disease can become silent. However, he may spread it if he has multiple sexual partners.

Many people are without symptoms for years, but will transmit during this time to an unsuspecting partner. Women suspect that something is wrong when they detect large amounts of foamy greenish or yellowish vaginal discharge. Associated with this is often pain on urination, pain with sex, and aches in the labia and upper thigh area. Some women may be asymptomatic carriers. On examination during a pelvic examination the physician sees tiny red ulcerations in the upper vagina, which are termed “strawberry spots” in medical textbooks. Men: In the beginning of the disease the infection is located more in the lower urethra with an early morning urethral discharge. There is painful urination (=dysuria) and more frequent urination. But otherwise there are not many symptoms and often these mild symptoms disappear. However, the pathogen homes in quite often in the male genital tract including on occasion the prostate gland causing the male to become an often asymptomatic carrier. On rare occasions it can cause a painful condition, called epididymitis, an infection of the epididymis. The epidydymis is the storage gland attached to the testicle, which normally stores the sperm until the next ejaculation. It is a very sensitive structure responding with some of the most severe pain when it is acutely infected.

In the woman the physician can take a direct smear during a vaginal examination and then observe the typical oval shaped Trichomonas protozoan with the familiar lashing flagella movements. It can also be cultured easily. In men an early morning specimen should be taken from the urethra and examined under the microscope. This is usually more difficult and culture methods are more sensitive and therefore more successful. Otherwise a concentration method is to use centrifuged urine or prostatic fluid and examine this for Trichomonas protozoans or culture it. 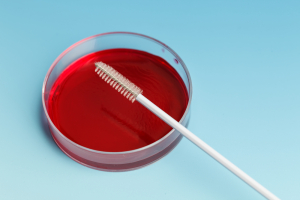 It is important to treat not only the patient that came to the office, but also the partner(s) that stayed at home. 2 grams of Metronidazole (brand name: Flagyl) is given as a single dose. This will cure trichomoniasis in women up to 95% of the time, when both partners are treated simultaneously. Alternative antibiotics are tinidazole or ornidazole.

Men are not so easy to cure, so it makes sense to treat for longer and with an overall higher dose, such as 500 mg of Metronidazole twice per day for 7 consecutive days. Occasionally there are resistant cases of trichomoniasis, which likely should be referred to a urologist. As other sexually transmitted diseases are common, the physician will want to check for other STD’s (Ref. 3, p. 1332).