Acquired immunodeficiency syndrome (HIV/AIDS) is caused by a retrovirus, called the AIDS virus or human immunodeficiency virus (+HIV). Two types have sofar been found, HIV-1 and HIV-2.The more common and more aggressive type is HIV-1, which is found all over the world. HIV-2 is found mainly in West Africa and some countries that have close ties to it. Both cause the same clinical disease picture, but HIV-1 seems to progress faster to the clinical stage. There are some misconceptions about infectiousness. For instance, viral hepatitis is much more infectious than HIV. We know this from health care workers who were accidentally injured by a contaminated needle or contaminated instruments.

The rate of lab certified seroconversion in the health care workers was only 0.5% in documented HIV cases, but was 25% if the blood came from patients who had documented viral hepatitis. The most infectious mode of transmission comes from blood to blood contact. The most dangerous situation is if there is unprotected sex with a person who has a concurrent chancroid ulcer (another sexually transmitted disease).

In this setting there is a weak immune system of the donor with AIDS with high numbers of circulating HIV viruses, which leak freely from a chancroid as this person engages in sexual activity. In the case of homosexual sex, where the recipient is exposed to the virus load via the rectum, there is the added risk by the fact that rectal mucosa is extremely fragile and leads to open micro-ulcers that will readily accept the virus directly into the blood stream. With heterosexual sex transmission of the HIV virus into the female recipient is not as easy because the vaginal mucosa is built stronger than rectal mucosa. On the other hand, if there are chancroid ulcers in the vagina transmission rates will be higher. 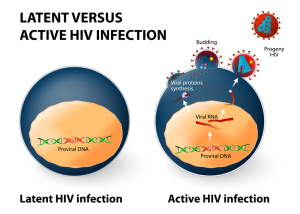 A lot of knowledge has been accumulated since the early 1980’s when the AIDS epidemic hit North America and the rest of the world. Here are some of the findings (Ref. 2, p. 3).

There seem to be several stages in the development of AIDS over time. There is the initial infection and it takes about 1 to 3 months before antibodies can be detected (before the AIDS test gets positive). However, during this initial phase the infectiousness is high as the immune system is paralyzed and the virus is rapidly multiplying. A slow invisible incubation phase ensues, where the patient feels well initially and it takes between 1 and 10 years before clinical signs of AIDS develop.

Without treatment AIDS then develops clinically and is recognizable by one or several “opportunistic” infections (candidiasis,tuberculosis, Cryptococcus etc.) that take place or by the development of malignancies such as Kaposi’s sarcoma or non-Hodgkins lymphoma. The common denominator is that now the immune system is profoundly weakened to the point where all these infections or tumors can develop. With the newer treatments since the 1990’s (particularly the addition of protease inhibitors) it is now possible to help AIDS patients to live a more normal life. Nevertheless, there are many unanswered questions and future research hopefully will shed more light on these and lead to new solutions.