How to achieve prevention of sexually transmitted diseases? The key to prophylaxis is avoidance of high risk situations.

It is interesting to note that in strictly monogamous relationships throughout the world no sexually transmitted diseases (STD’s) exist unless one of the partners has had an ongoing STD before entering the relationship. On the other hand prostitutes or customers of prostitutes are among the patients who seek the advice of a physician for STD most.

We know most of the pathogens that cause STD as described earlier in this chapter. It follows then that the best STD prevention is to engage in safe sexual practices, which means that each partner has only sexual relations with the other partner. It sounds simple enough, but in the 1960’s the borders of relationships were often blurred. They can be blurred also when a man or woman goes on a prolonged business trip or when alcohol is used excessively to the point where willpower gets undermined or judgment gets clouded.

Simple prevention of unsafe sex is the best prevention for the 21st century where strains of drug resistant tuberculosis, syphilis, chlamydia and HIV/AIDS are surfacing more and more.

Usually when the topic of “safe sex” is discussed the talk is very quickly focused on recommending the use of male and female condoms. However, the danger of barrier methods is to lull yourself into the belief that you are now protected when in reality you only reduced the risk of transmission of an STD by a certain percentage.

Then figures of perhaps an 85% reduction of STD’s by male condoms and a 95% reduction of STD’s by female condoms are mentioned. However, for a person who develops an STD it does not matter which way the barrier method failed as the disease is 100% present. On a population basis it may be true that transmission is reduced somewhat, however, if enough bodies with STD’s mix for various reasons STD’s are still transmitted.

The point I am making is that you need to decide whether you want to engage in risky sexual behavior or not. Ask yourself this question when you are sober. Let me explain that hepatitis C is not only in semen and cervical secretions and blood, but also in saliva. You do not even have to have sex, but just share a few kisses with a person who has hepatitis C and it can get transmitted. Barrier methods do not help here. By the same token it would be a grave mistake to believe that the birth control pill that prevents pregnancies would also prevent STD’s. It does not. Unsafe sexual practices in combination with using the BCP only make it easier for STD’s to be transmitted more rapidly. Compared to the past the BCP has benefited a lot of couples because the fear of pregnancy is no longer an issue. But a monogamous relationship is still needed for your emotional stability and health, for the health of the relationship, which can only flourish in the context of such a stable relationship and in order to prevent STD’s.

The cervical cap shown here will prevent pelvic inflammatory disease (PID), but the woman can still get vaginitis. Condom use is still advised both from the view of STD prevention as well as from a contraceptive point of view. 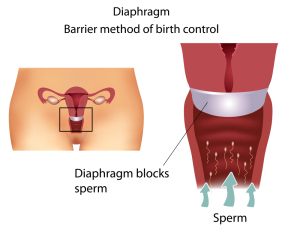 The best prevention is to engage in safe sexual practices, which means that each partner has only sexual relations with the other partner. Monogamous relationships are the safest way to prevent the transmission of STD’s. There are no barrier methods needed. Avoid risky sexual behaviors, as you would avoid other risky things. Be aware that other diseases like hepatitis C, tuberculosis etc. can also be transmitted with unsafe sexual practices or through contaminated needles. By being content in a monogamous relationship you save yourself a lot of headaches. By avoiding unsafe tempting sexual relations, you prevent jeopardizing your health and ruining your emotional and financial health. For women it is particularly important to be in a monogamous relationship as you avoid the added risk of cervical cancer from exposure to the papilloma virus. Papilloma virus, which causes cervical cancer, gets transmitted by promiscuous, unprotected sex. Males are largely asymptomatic, but spread the virus by promiscuous sexual behavior.