This form of VD is caused by Neisseria gonorrhea, a Gram negative intracellular bacterium, which tends to grow in pairs of two (“diplococci”). It is a fulminant form of venereal disease and wherever it grows, it is very destructive. Most of the time gonorrhea is a local sexually transmitted disease.
However, when it is neglected, it can get spread, in which case it can lead to a high fever with septicemia, joint involvement and occasionally also meningitis, pericarditis or endocarditis.

In the last few years resistant strains of gonorrhea have surfaced. In Toronto, Ontario a new treatment protocol has been implemented (see below under treatment).

In most cases the infection is affecting the genitals directly.In men the incubation time is 2 days to 2 weeks. There is a discomfort in the urethra, which is followed just hours later with dysuria (painful urination) and a pussy yellow discharge. Urination is now frequent and he has to go when he has to go (called “urgency”).

The examining physician will see redness of the opening of the urethra on the glans of the penis with pus in the small pocket behind the outside opening (“meatus”) of the urethra.

In women the disease is more varied. The incubation time after exposure is 1 to 3 weeks. It can be milder with only a mild burning with urination and a slight vaginal discharge. Or it can start with severe pain on urination, urinary frequency and vaginal discharge. The doctor finds on pelvic speculum examination that there is a lot of pus coming from the cervix, which is infected. On pelvic examination it is evident that quite often there is a fulminant infection in the fallopian tube on one or both sides. pelvic inflammatory disease. The infection with Neisseria gonorrhea leaves scarring behind wherever it leads to inflammation and this is why the fallopian tubes are glued to the ovaries when the PID (=pelvic inflammatory disease or salpingitis) has occurred. The end result is infertility in a high percentage of women who have had gonorrhea in the past.

With disseminated gonococcal infection (DGI) there are other clinical signs of disease, for which the physician looks out such as joint swelling and tenderness with joint involvement (gonococcal arthritis); changed heart contours,heart sounds and murmurs with pericarditis or endocarditis; neck stiffness and change of mentation with meningitis; high fever and shock with septicemia. 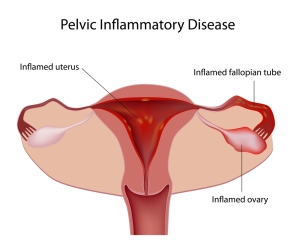 In men Gram staining of smears from the meatus of the urethra will show the characteristic Gram negative double cocci(=diplococcus) inside cells in more than 90% of cases. In women using the same technique of smears from cervical secretions will only be positive in roughly 60%. The negative cases in both sexes need to be cultured or tested using genetic gonococcal RNA probing methods. Blood cultures would be wise to get in any more seriously sick patient to rule out septicemia with DGI. In newborns of women with active gonorrhea eye infections have to be ruled out by cultures and prophylactic treatment is given.

Any treatment must take into consideration that chlamydia infections are often coexisting with gonorrhea.
As well, drug resistance of Neisseria gonorrhea against penicillin and tetracycline has radically changed the previously used treatment schedules. It used to be recommended to give ceftriaxone 125 mg intramuscularly once for gonorrhea and to combine this with doxycycline 100 mg twice per day for 7 days to cover for chlamydia. However, with resistant strains of gonorrhea developing in the US and Canada the new treatment protocol is now injectable ceftriaxone combined with oral azithromycin as this article in the Toronto Star (thanks to www.thestar.com for this link) shows.

There are other regimens involving spectinomycin , ciprofloxacin, ofloxacin or cefixime.

For disseminated gonococcal infection (DGI) higher doses of ceftriaxone are needed (1 gram intramuscularly or intravenously daily) until the infection is gone, often 3 to 7 days. Alternatives are cefotaxime or ceftizoxime. Usually the patient with this disseminated form of gonorrhea is hospitalized and an infection specialist will direct treatment.