Syphilis is a sexually transmitted disease that has been around for thousands of years and was for a long time the major venereal disease transmitted through prostitutes. The underlying infectious agent is called Treponema pallidum, which is a spirally shaped bacterium.

It can be seen utilizing a dark-field microscope. Alternatively a fluorescent technique can be used to demonstrate its presence. It is difficult to culture in a Petri dish in the lab. It is transmitted through intimate skin contact and quickly invades the body via the lymphatic and circulatory systems. There are four characteristic stages.

1.The primary stage is the stage of the syphilis lesion. It is a skin sore that enlarges and then breaks open, called “chancre”.

The primary lesions can look quite different depending on the location. Here is an image of a lesion on an extremity , which started as a reddish pimple that cleared in the center, but would leak some serum containing lots of syphilis bacteria. Untreated this takes about 4 to 8 weeks to heal. The chancre does not hurt. Another primary lesion on the tongue would look differently. A neglected primary lesion on a finger has almost a cancer-like look. The regional lymph glands get enlarged, but do not hurt. Characteristic locations of chancre sores are on the penis, the vaginal entrance, the skin between the vagina and the rectum in women (=perineum), and also in the anal and rectal area of homosexual men.

2. The secondary stage of syphilis consists of a skin rash (thanks to www.greatdreams.com for this image), which occurs about 6 to 12 weeks after the original infection. This is the time when syphilis is blood born and reaches the lymph glands in the whole body, the spleen, the bones, joints, the kidneys, the eyes (called “uveitis”) and the membranes around the brain (syphilitic meningitis). Syphilis has been called the “great imitator”.

This is because the rash can come in different shades and shapes on the same person and look like eczema, but then have a pustular appearance and again in another area look more like plaques. Any unknown rash should be looked at by a dermatologist as this specialist knows most about rashes and would not overlook a syphilitic rash. A special form of skin lesions, called condyloma lata, which are soft elevated waxy skin formations with dark pink color, appear on moist skin such as the penis shaft or the labia of a woman.

They also can occur inside the lips or nose and in the rectal mucosa. There are myriads of syphilis bacteria (Treponema pallidum) in the condyloma lata making contact with it very contagious.

3. The latent stage of syphilis is an in-between stage where the immune system has contained the infection, but it is still active, just dormant and waiting for the immune system to weaken, so it can flare up. In about 1/3 of untreated latent stage develop the tertiary stage of syphilis. But the majority after several years of the latent stage in development countries will experience a “spontaneous cure”. This is likely not by chance at all, but due to a fortuitous treatment of a cold with antibiotics, which happen to have covered the patient for syphilis in the latent stage as well. 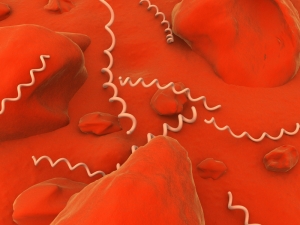 But it can be more dangerous when if affects the cardiovascular system, such as the aorta, or the Central Nervous System (=neurosyphilis).

The incubation time for tertiary syphilis is about 3 to 10 years from the beginning of the infection. The characteristic lesion for tertiary syphilis is the “gumma”, which consists of central necrotic tissue and a surrounding granulation tissue. This is histologically very characteristic of syphilis and served in the past (before the modern antibody tests) as identification of the disease. These gumma lesions are found in all of the affected body organs and lead to scarring and destruction of support tissue. When these lesions are incorporated in the aortic wall, the aorta can rupture and the patient die instantly. In the brain they can cause serious neurological, stroke like symptoms including paranoia. In a bone there might be a sudden pathological fracture and the surgeon may first think it would be a cancerous lesion, but the pathology,cultures and other tests are telling the physician otherwise. 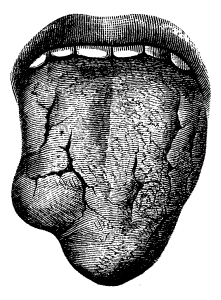 The symptoms have been largely described above already and will not be repeated here. As in the western world antibiotics are frequently given for colds, pneumonia, ear infections and urinary infections, it is rare to see untreated latent stage or tertiary stage syphilis (point 3 and 4 above).

However, it is common that a patient does not have primary or secondary stage syphilis treated and the disease can then spread as explained under point 1 and 2 above. It is therefore important to stress that any skin ulceration or red lesion around the genital area that does not hurt (possibly a chancre ) should be brought to the attention of a physician. Appropriate tests need to be done at this stage as in this stage the spirochetes (=the spiral shape Treponema pallidum) are easily detected with dark-field microscopy. In the secondary stage of syphilis the symptoms can be very misleading. If the joints are involved, there would be swelling of the joints and symptoms are similar to arthritis with joint stiffness and joint pains.

With bone marrow involvement there can be a pronounced anemia, which makes the patient feel fatigued. Spleen and liver are enlarged, the appetite is diminished, the patient feels sick, looses weight, might get jaundiced. If meningitis is present, there are headaches, neck stiffness, hearing loss might occur and the eye movements may be abnormal resulting in double vision. The physician may see edema of the optic nerve(=papilledema) when the eye is examined with an ophthalmoscope.

The important point to remember is to see a physician and to tell all of these symptoms and insist to be thoroughly examined and if necessary have the appropriate blood tests done. If syphilis is not detected at this stage, it will relentlessly go on to the latent or the tertiary stage and gumma in the aorta or in the brain could form, possibly killing the patient. If the bone gets infected and gummas are formed there, sudden pathological fractures can occur. This means that there is a pathological process that softens up the bone and the body’s weight or a force from moving an arm of leg can suddenly lead to a fracture of the bone.

In primary syphilis the serous discharge from the primary lesion (the chancre) is examined under the dark field microscope and Treponema pallidum can be directly identified (thanks to www.glowm.com for this image). Chancres can also occur outside the genital area and the physician must remember to think about the possibility of syphilis.

Secondary syphilis may be recognized when there is a rash, but this may also be mistaken for other skin rashes. The serological tests for syphilis are usually positive at this stage (one common one is called “VDRL”, which stands for Venereal Disease Research Laboratory). In the latent and in the tertiary stage of syphilis other tests need to be done and it depends somewhat on the clinical presentation. Neurosyphilis needs to be ruled out by lumbar puncture and analysis of the cerebrospinal fluid. Bone scans may be needed to look for gummas in the skeleton. MRI scans, CT scans and ultrasounds investigations can be useful to look for aortic lesions, cardiovascular syphilis involving heart valves or lesions in the spinal cord or Central Nervous System. The physician will have to individualize the investigations depending on the clinical presentation.

For most patients the treatment of choice is penicillin G by injection (except for those allergic to penicillin). This is given as 1.2 million units of benzathine penicillin G (brand name: Bicillin LA) intramuscularly into each buttock.

This provides for a good blood level of penicillin G for about 2 weeks. For patients who are allergic to penicillin ceftriaxone (brand name: Rocephin) is given intramuscularly at a dosage of 1 gram every 3 days for 4 doses. Alternatively erythromycin , tetracycline or doxycycline can be given by mouth. However, there is a big problem with taking the oral medicine regularly and for a complete course of 15 days. Part of the treatment is to examine and treat all sexual contacts of the syphilis patient over the past 12 months as well. There should be no sexual relations until the present partner is also treated in order to avoid cross infection. All stages except the tertiary stage are treated as outlined above.

In tertiary syphilis the dosages might be higher and the treatment lasts longer. Also the period of careful follow-up is longer than with the more simple cases.

A dosage of 2.4 million units of Bicillin LA in intervals of 7 days for a total of three injections (total of 7.2 million units) is standard for tertiary syphilis. The antibody titres fro Treponema pallidum should show a fall of at least 4-fold by 3 months from the treatment start. In the case of neurosyphilis lumbar puncture and analysis of the CSF (=cerebrospinal fluid) should be done. Also, at the end of the treatment protocol a repeat lumbar puncture should be done to demonstrate that the therapy has been successful. About 6 to 12 hours after the antibiotic injection half of the patients will have an expected reaction, called Jarish-Herxheimer reaction. This is a generalized reaction to the massive kill of the Treponema pallidum .