It is of significance to note that a large percentage of Americans and other people in countries of the Western civilization eat too much starch, sugar and fat.

This causes people to gain weight and the end result according to Sears (Ref. 1) and other authors is that there is a significant change of metabolism (production of too much insulin). This may not be immediately apparent and often takes several decades to manifest itself.

One of the earliest signs are hypoglycemia symptoms about 1 1/2 to 2 hours following a high glycemic meal. What is such a meal? The “normal” North American diet with bread, pasta, rice or potatoes and donuts, candy and chocolates as a dessert. Such foods contain highly refined carbohydrates and sugar devoid of fiber, minerals and vitamins, which causes low blood sugar in the affected person after a meal. With these hypoglycemic episodes you feel weakness, confusion, lack of concentration, heart palpitations, cold hands and feet and a hunger for starchy foods and sugar. Many overweight and obese people suffer from these episodes, but may not even be aware that this is what gets the vicious cycle going. After several years of having elevated insulin levels, which produce the hypoglycemic episodes, the following are the consequences of this syndrome. Diabetes and high blood pressure develop, infertility occurs in women (from the polycystic ovary syndrome) and impotence in men. 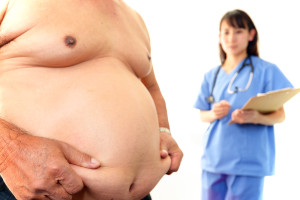 With hardening of the arteries due to high LDL cholesterol and high blood lipids eventually heart attacks and strokes result after about 10 to 20 years. Many physicians think now that prolonged exposure to high glycemic meals will be a likely cause of cancer, can be the cause of autoimmune diseases and also the cause of arthritis. We know now that oxidized LDL cholesterol plays a key role in the accelerated hardening of arteries that cause circulatory problems in the legs, the heart and brain vessels. Cut out sugar and starchy foods and the LDL normalizes, the hardening of the arteries stops.

The common denominator of this condition is ” insulin resistance”, also called ” metabolic syndrome”. Type 2 diabetes often develops in a person who eats too much sugar and fat and this is often coupled with not exercising enough. The extra calories are stored as fat in the abdomen and as glycogen in the liver.

This requires insulin as this hormone is regulating both the sugar and fat metabolism. In the early stages of the metabolic syndrome the pancreas produces more than the average amount of insulin (called “hyperinsulinism”) and this is what causes the hypoglycemic attacks (from low blood sugar) described above. But there is a limit of how much the body can compensate for. Eventually insulin function intracellularly is impaired and glucose is not cleared from the blood as effectively by converting it into glycogen (the storage form). Instead the excessive calories are stored as abdominal fat and fat throughout the system including the arterial walls (lipid disorder and “atherosclerosis”). There are many inflammatory substances that are circulating in the blood causing a chronic inflammation in the blood vessels and in the body. This will also occur in the coronary arteries, called coronary atherosclerosis and eventually a heart attack can develop from this. Similar changes occur in the brain vessels and the carotid arteries preparing the right conditions for a stroke to develop.

At a later stage this can cause type 2 diabetes when the patient’s pancreas runs out of insulin supply and overt diabetes is evident by high blood sugars.

It has been proven by authors such as Sears (Ref. 1, chapter 7, page 62-87) that a zone type fruit and vegetable diet containing lean protein will turn around many of these pathological states within 2 to 3 months and lead to a normalization of the metabolism.

Such a weight loss diet plan will influence the metabolism in a way that the insulin receptors that were sluggish before become normally responsive the way they were in the past when the person was healthy. Pasta is replaced by shirataki noodles, which are made from the glucomannan root (a soluble fiber product). This will prevent an insulin response and the associated hypoglycemic response. On the longterm it helps you to loose weight, get diabetes under control, lower high blood pressure, prevent heart attacks and strokes and also a number of cancers (breast cancer, prostate cancer, colon cancer and others).

Miraculously women get pregnant again, diabetics normalize their blood sugars, impotence gets cured, aches and pains of arthritis can improve or disappear. This proves that excessive food intake and calorie restriction have a powerful influence on our metabolism by normalizing the insulin levels. Proper nutrition and calorie restriction are powerful, yet simple tools that can be used to stabilize our metabolism. This needs to be combined with a sensible regular exercise program and most major diseases can be prevented or significantly postponed this way as I explained in many other chapters regarding various disease states.

Contrary to many authors who want you to believe that a calory restricted weight loss program would be a difficult thing to do, it is actually easy for about 80 to 90 % of overweight and obese people with no major hunger pangs.

You loose about 2.5 pounds per week on average (in the first few weeks you may even loose 4 pounds per week due to additional fluid loss). A person who is 50 pounds overweight would therefore take about 20 weeks to achieve this weight loss (that is about 5 months). However, this can only be achieved, if you cut out sugar, starchy foods and excessive fat intake to achieve calorie restriction. The more you learn about food and what low glycemic foods are, the easier it will be for you to do this on your own. However, I encourage you to discuss this with your doctor, as long as the doctor is knowledgeable. A dietition will be useful as long as he/she is knowledgeable about the latest on low glycemic diets for calorie restriction and does not (as many unfortunately do) push refined flour as an “essential” ingredient of any diet. The key to success with a weight loss program is to eliminate refined flour and sugar and to stick to a calorie restricted diet with regular meals that will avoid hypoglycemic attacks. It is the hypoglycemic attack 1 1/2 to 2 hours following a high glycemic meal that undermines the success of the person on a diet. This has been reconfirmed recently in a study that I have discussed in this blog.