A chapter on strokes would not be complete, if nothing would be mentioned about stroke prevention. Physicians are very limited with what they can do when a stroke has happened as brain tissue has often been lost and scarring sets in following a stroke. Looking at tooth decay it is certainly important to think about the cause of plaque formation, tooth decay and eventual tooth loss. After identifying the risk factors the next step is to cut out sugar consumption, brush your teeth and floss them regularly. Many of you know that and those of you who do this regularly likely still have their own teeth.

What does that have to do with prevention of strokes? The same preventative thinking works in stroke prevention. I have mentioned earlier and in other parts of the Net Health Book that there are preventable risk factors that lead to stroke. For ease of reference I have listed them in tabular form here again (modified from Ref.12).

Dietary factors: low fat, low refined carbohydrate diet, which is good for your teeth and is also good for the rest of your body. Another dietary factor is magnesium. It has been shown in many studies that a lack of magnesium, particularly when it leads to a magnesium blood level of less than 1.7 mg/dL leads to high blood pressure, which in turn causes strokes. Several studies have shown that nuts and olive oil reduce stroke risk.

Inactivity: the blood needs to circulate and HDL-cholesterol needs to be built up by regular exercise (at least 30 minutes of a brisk walk every day, but better still 45 to 55 minutes daily).

Hypertension: don’t get it and if you have it use medicine and life style changes to keep it under close control; use the DASH diet to get hypertension under control naturally.

Hyperlipidemia: high blood fats in your blood cannot be good for your heart or brain arteries. If you have this, see your doctor and get medicine to control it closely.

Obesity: this did not happen overnight. You tackle this by attacking inactivity, dietary factors and mental attitude all at the same time. It can be done. Get support, cut out the main offenders to get started (like sugar and starchy foods); also make sure you do not have hypothyroidism, which is treatable.

Smoking: this is a habit due to addiction to nicotine. It may go much deeper than you think. Smoking can be an escape from stresses in life. Whichever way works for you, you need to get off cigarettes and other addicting stuff. Smoking leads to narrowing of the small vessels in the brain, particularly in the middle cerebral artery, leading to ischemic stroke. But nicotine also elevates blood pressure, which can contribute to hemorrhagic stroke when arterial pouches are present.

Cocaine use and alcoholism: has been linked with hemorrhagic stroke (Ref.12).

Prevent depression and you prevent strokes: 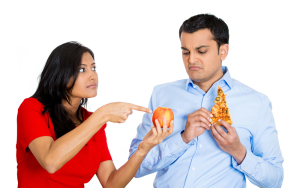 Dr. Philip A. Teal from the Vancouver General Hospital (Director of the British Columbia Centre for Stroke and Cerebrovascular Disease) gave a talk at a conference  entitled “Stroke Prevention.”

He stated that about 80% of strokes are preventable through life style changes by paying attention to what I summarized for you above. He also said that they found in BC that about 40 % of all strokes originated from diabetes, hyperlipidemia and high blood pressure that were not adequately controlled and from smoking that had not been stopped. In other words they were entirely preventable. The other 40% of preventable causes are lifestyle decisions regarding food intake and inactivity. These BC vital statistics are identical in the US and in many other parts of the world. Many people have enough will power to change this on their own. Others need to do it under the guidance of a YMCA program or other equivalent program. Like brushing your teeth, limiting your sugar intake and flossing your teeth, which are very simple steps to take, you need to pay attention to your body, particularly the arteries that go to the brain and heart. Whatever I suggested in the table above is good not only for your brain, but also for your heart. It’s a “two-for-one-deal”.

In those patients where a transient ischemic attack has taken place urgent tests of the carotid arteries are needed, as a high percentage may have severe narrowing of the arteries predisposing them to the development of a stroke in the near future. Carotid endarterectomy can be done for this with a success rate of stroke prevention of 70 to 80 % (with proper selection of the patients who will benefit).

A study from Copenhagen has shown that heart attacks and strokes can be prevented by vitamin C from vegetables, fruit and supplements: https://nethealthbook.com/news/vitamin-c-against-heart-attacks/

Those who had a stroke can do “secondary prevention” by taking a baby aspirin daily to thin the blood and this can be combined with extended release clopidrogel or dipyridamole. Ask you family doctor or specialist about this. Risks and benefits of medications have to be assessed in each patient according to the circumstances. As you know aspirin (ASA) can cause severe stomach bleeding in a small number of patients.
In Ref. 14 a study is described where 36,686 Finnish participants aged 25 to 74 years were followed for 13.7 years by a Chinese research team. They had no cardiovascular disease or stroke in the beginning of the study, but 1478 developed strokes during the study (1167 ischemic and 311 hemorrhagic). 5 life style factors were analyzed, namely being a non smoker, having a BMI of less than 25.0, whether or not they engaged in light to moderate physical activity, consumed vegetables at least three times per week and whether they had light or moderate weekly alcohol consumption. The risk of developing stroke was analyzed depending on these 5 health factors. When two, three, four or five of these factors were present, a 33%, 40%, 50% or 70% lower risk for ischemic stroke was found while for ischemic stroke the risks were 37%, 51%, 51% and 60%. This is an important study as it demonstrates how beneficial life style factors are in preventing strokes.

Here is a link to 17 causes of hardening of arteries; avoiding these causes will help to prevent strokes: http://www.askdrray.com/seventeen-causes-of-blood-vessel-disease/

Minerals that help with stroke prevention

More than 180,000 nurses were enrolled in two independent Nurses Health Studies and followed between 22 and 30 years. They found that potassium, calcium and magnesium supplementation significantly lowered stroke risk.