According to Sears cyclic AMP levels are chronically diminished by elevated insulin levels, which puts a damper on a multitude of hormone systems (Ref.1).

For instance, all the steroid hormones (testosterone, estrogen, progesterone) require cyclic AMP for their production. It is an important second messenger that is an intermediary between the hormones and the cell metabolism.

What does this mean in practical terms? It means that if we eat the wrong foods such as the typical North American diet with lots of starch in foods such as pasta, bread, potatoes, rice and refined cereal as well as sugar in its various disguises, the chances are that many people end up with chronically low cyclic AMP levels. This in turn will turn off our energies and cause a low sex drive. It also can be a cause of infertility as the female hormone cycles are interfered with. Interference with thyroid function from low cyclic AMP levels causes slow mentation, weight gain and low energy (hypothyroidism symptoms). It also can cause sleeplessness and make us more prone to mental depression. If this sounds familiar, it is because this is what is happening to a lot of people.

The problem is that there is no company that in its right mind would put a warning label on a cereal package or a package of donuts, cookies, pasta and white bread that would read: “This is a product that has undergone a refining process that has removed most of the natural bran. When you eat this your blood sugar may rise above normal levels and this in turn will likely give you an insulin response causing metabolic syndrome. As a result your cyclic AMP levels may be chronically lower than normal changing certain hormone functions…” Bad for business, so it is not done. But it is not good for your health either!

The chronically elevated insulin response is the cause of the metabolic syndrome. This in turn shortens our life span, if it is not addressed. It stands in the way of longevity and it does so by causing arthritis, hardening of the arteries and contributing to the higher frequency of cancer when we get older. Much of this is reversible by modifying what we eat. 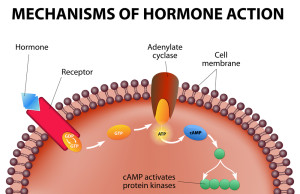 The other problem is that routine laboratory tests cannot detect deficiencies in cyclic AMP. It is only possible to determine the changes in the metabolic pathways in time consuming research settings by measuring the various “substrates” , “enzymes” and hormones that are involved in the complex biochemical pathways involving cyclic AMP. In other words it is not feasible to do these type of lab tests routinely.

In the following sections, I will describe the major hormone disorders. The interested reader is referred to chapters 13 to 25 of Ref. 1 for a more detailed description of the metabolic aspects of hormones. Here the emphasis is on hormone deficiencies, overproduction states and how to cure them.