In this introduction to hormones we will learn that hormones are powerful biological signals, which help to integrate the various organ systems in the body.

The adrenal glands, thyroid gland, ovaries and testicles are all examples of such feed back loop systems. For instance, if the thyroid gland does not produce enough thyroid hormone, the hypothalamus will send more thyrotropin-releasing hormone(TRH) to the anterior pituitary gland. There thyroid stimulating hormone(TSH) is being formed at a higher rate, which in turn will stimulate the thyroid gland to produce T3 and T4 thyroid hormones. The presence of circulating thyroid hormones is being recognized by the hypothalamus and a reduced amount of TRH is secreted by the hypothalamus. The image below illustrates all these connections with the example of the pituitary gland and the other dependent hormone glands and organ tissues.

Such negative feedback loops are very useful to automatically adapt our hormone production to the changing needs throughout a day. This ensures that the hormone balance is maintained within the body. Similar feedback loops are in place between the gonads (testicles and ovaries) and the hypothalamus/pituitary gland and also with growth hormone production. Apart from the releasing hormones in the hypothalamus there are many neuropeptides, called neuronal transmitters, such as serotonine, dopamine, acetylcholine and many others, which are operational within the central nervous system and the rest of the body. They are transmitting nerve signals in the nervous system and the vegetative nervous system (sympathetic and parasympathetic nervous systems).

When it comes to hormone replacement, it has become clear from the experience with HRT (hormone replacement treatment in women following menopause) that not all hormones are equal. Bioidentical hormones are the safest modality of treatment. This has recently been reviewed by a team of experts who compared conventional medical treatments with bioidentical hormone replacement from compounded creams (Ref.16). I find it very interesting that these authors publishing in a prestigious medical journal such as Postgraduate Medicine, concluded that it would be safer to use the bioidentical compounded hormone applications rather than the synthetic hormone preparations (manufactured by drug companies). The authors explained why: because the chemical structure of the compounded natural hormones were identical to the body’s hormones and these were healthier for the body. The reason is that the natural hormone molecule functions like a key that fits exactly into the hormone receptor of the responding cells. The authors recommended to doctors to prescribe bioidentical compounded hormones for this reason (no risk of heart attacks, cancer, clotting etc.). 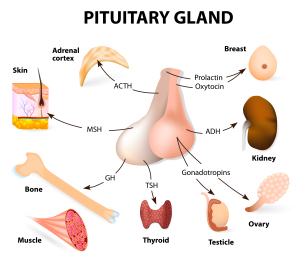 Diminishing hormones as we age

At the 19th Annual World Congress Anti-Aging and Aesthetic Medicine in Las Vegas (December 8-10, 2011) Dr. Hertoghe (see also Ref. 17) pointed out in several presentations that hormone production of our hormone glands is diminishing throughout our lives. In women this becomes critical during menopause (age 35 to 55) and in men typically between 50 and 65 (male menopause or andropause). In older people growth hormone production (along with estrogen and progesterone production in women and along with testosterone production in men) can be so low that bones become brittle (osteoporosis) resulting in fractures after only minor falls. Hormones should be tested from time to time to spot when they decline. Whatever is missing should be replaced to the point of reaching a hormone balance again (using small physiological doses of the natural hormones, not of synthetic hormones that cannot be properly detected by the hormone receptors). In this way osteoporosis and other disabling diseases can be prevented.

Antiaging Treatment with Bioidentical Hormones : This link takes you to an interesting overview regarding antiaging medicine, which employs the knowledge of balancing hormones to prolong our lives.

The table below lists some of the important hormones in the body and their actions:

Some hormones and their actions

Finally, there is the ecosanoid system, which works on a cellular level (tissue hormones).

You may have heard of prostaglandins, leukotrienes, lipoxins and others. They are all various ecosanoids that have anti-inflammatory, immune stimulating or artery hardening effects in the body. Dr. Barry Sears describes in chapter 16 of his book (Ref.1) the details of the ecosanoid metabolism. Other authors have also described the “syndrome X”, which is now called the “syndrome of insulin resistance”, “hyperinsulinism” or “metabolic syndrome”. In diseases such as diabetes the chronically elevated blood sugar and the elevated insulin level lead to accelerated hardening of the arteries (atherosclerosis) as is pointed out in Ref. 2. The biochemistry of elevated insulin levels and of chronic inflammation is now more fully appreciated by physicians as the cause of arthritis, cancer, heart attacks and strokes.