Diabetes (also called “diabetes mellitus” or DM for short) is the most common form of problems with sugar metabolism worldwide. This is a common medical problem, particularly in the obese population. It is now known to be associated with chronic inflammation, particularly in persons with a significantly elevated body mass index (BMI) of 30.0 or more. There are a number of independent markers such as the C-reactive protein and others that are associated with a high mortality rate (Ref.10).

My interest here is to show that diabetes needs to be actively sought, risk factors need to be identified and the patient needs to work on normalizing the blood chemistry and inflammatory response in the body to minimize the risk of dying. In some cases this requires a multidisciplinary team that works with the patient, but most patients are able to work on this together with their health care provider on an ongoing basis.

Diabetes tends to run in families, but usually is triggered by an overload of sugar and starchy foods leading to excessive weight (BMI exceeding 25.0). Ethnic factors (African American, Latin American, and Native American) play an important role as well. Other factors are age, stress, lack of physical activity, wrong diet with too much sugar and starch, westernization and urbanization (eating junk foods). Diabetes is still mainly a disease of the aging person. Once people have diabetes, they age even faster (Ref. 11).

Lately specific nutrients have been investigated, that if absent can trigger the development of diabetes. One key component of our diet is magnesium content. It is naturally contained in spinach, bananas, dark chocolate, brown rice and almonds. Often with food processing magnesium is inadvertently removed. Only half of the Americans get the minimum required daily magnesium allotment, which consists of 320 mg or more of magnesium for women and 420 mg of magnesium or more for men. A study from Tufts University dated Oct. 17, 2014 describes this in more detail. Briefly, if people had sufficient magnesium in their diet, they were 37% less likely to develop diabetes in the following 7 years.

In a diabetic the blood sugar is too high and the tight regulation to bring elevated blood sugar back to normal following a meal (present in a normal individual) is lost. Two hormones from the pancreas, called glucagon and insulin are important for the regulation of blood sugar levels. They are balancing each other in action: glucagon increases glucose by releasing glucose from glycogen (the storage form of glucose) of the liver. Glucagon is produced by the alpha cells of the Langerhans islets in the pancreas. The beta cells of the Langerhans islets produce insulin, which lowers blood sugar and in some clinical conditions, where too much of it is around, hypoglycemia would result. This term simply means “too little sugar in the blood”. Hypoglycemia is a very dramatic condition as the person passes out, often in a coma. 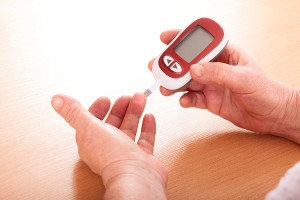 When a person has a normal weight with a BMI of less than 25.0, the two hormones are balanced and blood sugar is kept in the normal range, both fasting and after meals. However, with weight gain and with increasing age the metabolism is changing. The regulation of the blood sugar level is complicated by the fact that the liver is capable of storing sugar (=glucose) as glycogen, the storage form of sugar. When you are starving yourself, the blood sugar level is kept constant by melting down this portion of stored sugar so that the blood sugar stays relatively normal. In obese people the insulin receptors lose their ability to be regulated by insulin, called insulin resistance. But with age or obesity the liver metabolism is changed due to an enzyme, called glucose-6-phosphatase, which is stimulated by high blood sugar levels. Glucose-6-phosphatase breaks down the stored glycogen to increase the blood sugar levels (called “glycogenolysis”). Another aspect of the same enzyme is that it facilitates the metabolism of protein and fat into blood sugar as well, a process called gluconeogenesis. The end result is a double whammy in the sugar metabolism leading to increases in the blood sugar level at the worst possible time namely after meals. Often these elevated sugar levels that diabetics can monitor on their gucosometer readings, will last for hours when normally a person without diabetes would clear a slightly elevated blood sugar within an hour after a meal.
The end result is a blood sugar level of over 140 mg/dL two hours after a meal, which means that this person is a diabetic. Overall the metabolism is deranged by elevated insulin levels with a partial inability to clear sugar into the tissues (insulin resistance) and this is made worse by a breakdown of glycogen and new formation of sugar from protein and fat. This is a perfect storm to rage in the body, but the patient often does not know this for several years until a major complication of diabetes occurs (blindness, heart attack, stroke, kidney failure, cancer). By that time there can already be severe irreversible damage in many organs of the body. The prolonged elevated blood sugar levels after meals burn out some of the insulin producing cells in the pancreas, which leads to higher blood sugar levels as less functioning insulin is available in the body to clear sugar from the blood.

Below I will emphasize how vitally important it is to intervene at the earliest possible stage through preventative steps and early effective therapy.
Type 1 diabetes is associated with some autoimmune diseases such as Hashimoto’s thyroiditis, idiopathic Addison’s disease and Graves’ disease. In type 1 diabetes mellitus the pancreas is running out of insulin. In type 2 diabetes mellitus there is too much insulin circulating in the blood(“hyperinsulinism”), but because of ineffective or deficient receptors the blood sugar, which is elevated, will not enter into the cells. The same mechanism of hyperinsulinemia is present in the diabetes of pregnancy (gestational diabetes). 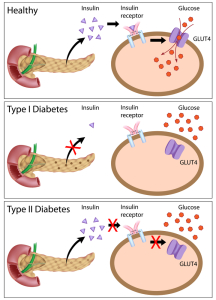 Diabetes (type I and II)

Calorie restriction will normalize the liver metabolism as will exercise. A Mediterranean diet has a lack of sugar and over processed starch, which helps the pancreas to get a break with regard to insulin overstimulation. The physician has the option to use Metformin, which works by blocking the breakdown of glycogen in the liver, reduces absorption of sugar from the gut and increases insulin sensitivity. In many cases this will normalize the metabolic changes and cure diabetes. In those cases where too few insulin producing cells are left in the pancreas, insulin injections may have to be considered.

It is important to note that interventions with strict lifestyle changes (diet, exercise) can be very effective, if maintained. This has been described with 20 year follow up data in this study from China.

Another research group found that diabetes can be cured with a very-low-calorie-diet: https://nethealthbook.com/news/diabetes-reversible-diet/

There are three main categories of DM as follows, type 1diabetes, type 2 diabetes (usually known as “diabetes”) and gestational diabetes. The 4th category is diabetes insipidus, which is due to an entirely different cause.