Stroke is very common. There are about 750,000 strokes in the US per year of which 85% to 90% are ischemic strokes and 10% to 15% are hemorrhagic strokes. There are about 4.5 million people in the US who survived strokes (Ref. 12).
A stroke is a medical emergency where a person suddenly changes from functioning normally to a person who may have a set of complaints such as headaches, inability to move a body part and change in level of consciousness (dizziness, confusion, all the way to possible unconsciousness or coma).

In a dense stroke there may be an inability to move the muscles of one body half. Often the person may fall and if older, may break the more brittle bones (typically a hip fracture or wrist fracture) as the person is off balance and falls. The obvious thing to do for an onlooker is to call 9-1-1 to get an ambulance so that the patient can be transported to the nearest hospital. There the physician will stabilize the patient and arrange an emergency CT or MRI scan. Here is a simple test based on three brain functions that anyone can do, if you suspect a person around you may suffer from a stroke:

If he or she has trouble with any of these tasks, call 9-1-1 immediately and describe the symptoms to the dispatcher.

After discovering that a group of non-medical volunteers could identify facial weakness, arm weakness and speech problems, researchers urged the general public to learn the three questions. They presented their conclusions at the American Stroke Association’s Annual meeting in February of 2004. Widespread use of this test could result in prompt diagnosis and treatment of a stroke and prevent brain damage.

The same stroke symptoms can come from different causes

In the following I am describing that there can be very different reasons for similar symptoms. For instance, the underlying pathology in the above example could be a brain tumor that presses onto the part of the brain that controls body motion. However, there might be a closing off of the middle cerebral artery on one side through a blood clot dislodged from heart valve disease (embolic stroke) or the middle cerebral artery may have been narrowed down so badly that one day it suddenly closes off completely (ischemic stroke). 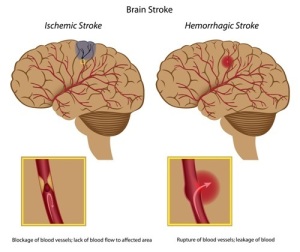 This would be an example of an ischemic stroke on the basis of arteriosclerosis (hardening of the arteries), which happens for instance prematurely in a patient with diabetes mellitus, but which commonly happens also in old age. Another mechanism for stroke is with poorly controlled high blood pressure, when one of the small blood vessels may rupture and bleeding occurs in the brain tissue with identical symptoms as above (hemorrhagic stroke). Finally, in more rare cases a congenital pouch exists in one of the arteries of the brain, called brain aneurysm, which tends to rupture as the person ages and suddenly leads to a subarachnoid bleed (or hemorrhage).
In the following I shall deal with the most common conditions just mentioned (Ref. 9, p. 1538). 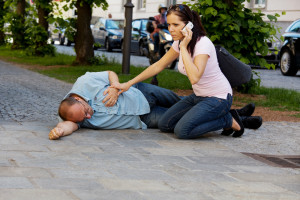 Other Causes of Strokes

A primary brain tumor (benign of malignant) or a brain metastasis of a cancer elsewhere in the body (for instance lung cancer, melanoma, breast cancer or prostate cancer) can also produce the signs of a stroke. Clinically the first signs are often like an ischemic stroke. However, the CT scan or MRI scan would show the typical findings of a metastasis rather than an ischemic stroke. Also, in time this metastasis would increase in size while the ischemic stroke heals with a scar.

On the other hand, a clot from a diseased heart valve (for instance from prior rheumatic heart valve disease) or a clot from an arteriosclerotic plaque at the bifurcation of the carotid artery will produce the clinical picture of an ischemic stroke. Sometimes such underlying diseases lead to a serious of mini strokes. Treatment with ASA or full anticoagulation initially with heparin and later with Coumadin to thin the blood might have to be done. If other medical illnesses such as diabetes mellitus or hypertension are present, these conditions would have to be treated diligently and persistently.

It is important that the patient understands that a one-time treatment of these conditions will not change the long-term risk. However, the patient needs to understand also, that long-term control of hypertension and diabetes mellitus will produce marvellous results. I know how difficult it is to be persistent. But this is an area where the affected person becomes his or her own hero and the gold medal in this Olympic event is the prolongation of your life!

Death rate after a stroke

Aa study in Denmark in Nov. 2014 showed that people who were on COX-2 inhibitors for their arthritis and came down with a stroke, had a much higher death rate following a stroke when compared to those who did not take these drugs. See more about this via this link.