A transient ischemic attack (TIA) presents as a neurological problem similar to a mini stroke, but very fleeting in nature and with symptoms that revert completely back to normal within a 1- or 2-hour period, at the latest within 24 hours.

According to Ref. 12 about 50 to 80 cases of TIA’s per 100,000 persons occur annually or 200,000 to 500,000 persons in the US. Males are affected more than females and African Americans more than Caucasians.
Depending on the underlying pathology this might be harmless or it might be the first sign of an impending stroke that could be disastrous. It warrants a careful work-up by a neurologist. We know that in about 10 to 15% of cases clots from the heart can be the cause (particularly in people with atrial fibrillation). In 20 to 25% hardening of the arteries in larger vessels (carotid artery in particular) can cause a TIA. The other cases are due to low blood pressure episodes, arteritis (among them temporal arteritis) and hypercoagulable states or “thick blood” (Ref. 12).

There is a sudden neurological symptom with which the patient presents such as loss of speech, numbness and lack of power in one extremity or visual problems including a brief episode of blindness. However, the symptoms only last a few minutes up to at the most 1 or 2 hours. There is no loss of consciousness. These attacks could happen as isolated events, but often happen intermittently 2 or 3 times in a year. If there are frequent TIA’s, the patient is at a significantly higher risk of developing a full stroke at a later time.

In other words, nature gave us a grace period to sort out what is going on. The patient should be hospitalized for at least two days and tests should be done including a CT scan of the brain and possibly an angiogram of the blood vessels to the brain, particularly images of the carotid and vertebral arteries.

Ultrasound Doppler studies would also be useful to examine the bifurcation of the carotid arteries and the blood flow through the major neck vessels. An echocardiogram to look for abnormalities of the heart valves would be another useful test as well as a 12 lead ECG of the heart to rule out heart abnormalities. The rationale of all these tests is that the physician is looking for causes for shedding of emboli such as from ragged heart valves or arteriosclerotic plaques in the carotid arteries or the vertebral arteries.

CT scan of the brain

The CT scan of the brain rules out an existing stroke, scarring from a previous stroke, a brain tumor and an aneurysm. Some blood tests are also done to rule out diabetes mellitus and autoimmune diseases such as lupus erythematosus or polymyalgia rheumatica. It is interesting to note that despite a complete resolution of their symptoms 20% to 50% of patients with a TIA show signs of a brain tissue infarct on an MRI scan, in other words they had a complete small stroke, but the adjacent nerve cells were able to compensate for the loss of brain cells (Ref. 12). A Holter monitor (ambulant 24-hour heart rhythm monitoring) rules out intermittent irregular heartbeats. 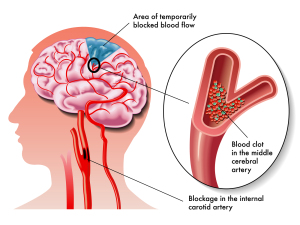 Sometimes, if the physician finds a marked arteriosclerotic change in the carotid artery with a narrowing of the lumen of 70% or more, a cardiovascular procedure called endarterectomy has proven to be very valuable, as it will not only stop the TIA, but also prevent a stroke. Alternatively carotid stenting can be done.

However, not all findings are as clear as that and the recommendation by the physician will depend on the findings of these and other tests. In the case of a minimal narrowing of the vertebral arteries or carotid arteries, the doctor may prescribe ASA or ticlopidine (brand name: Ticlid, Apo-Ticlopidine or Nu-Ticlopidine) as antiplatelet drugs.

With atrial fibrillation as a heart rhythm and blood clots being shed from the heart chambers, anticoagulant therapy with heparin initially, then a switch-over to Coumadin would be the therapy of choice. In the case of a singular metastasis in the brain from a previously treated melanoma, for instance, life can often be prolonged by an excision of the brain metastasis by a neurosurgeon. This may or may not be followed by radiation therapy.
The key after the recovery from a TIA is to vigorously control blood pressure and control dyslipidemia, if present; also control blood sugars in the case of underlying diabetes and quit smoking, if the patient is a smoker.