A brain aneurysm (=cerebral aneurysm) is a sac-like malformation of a blood vessel of one of the main arteries underneath the brain. When it ruptures, a so-called subarachnoid hemorrhage occurs with loss of consciousness.

A spontaneous rupture of a brain aneurysm is a rare condition as it occurs only in about 6 to 8 cases/100,000 persons per year. However, it usually ruptures in a younger age group of 40 to 65 years and therefore has an enormous social impact. The natural course of a ruptured aneurysm has been described in a large study from Australia and New Zealand (Ref. 4).

After 1 year from the subarachnoid hemorrhage (SAH) the following was found: Only 56% of patients were alive after one year and 46% of these had a neurologically incomplete recovery. The deficits ranged from memory loss (50%) to mood disturbances (39%), speech problems ( 14%) and problems with self-care (10%). Some of these findings overlap and that’s why it adds up to more than 100%.

These authors concluded that there is a high incidence of deficits in neuropsychological functioning, which justify a more aggressive stance when non symptomatic aneurysms are found on CT or MRI scans for other reasons. Another study from Japan (Ref.5) underscores this as well.

Long-term follow-up studies with regard to aneurysm patients

These authors followed 62 asymptomatic aneurysm patients for 6 months to 17 years and they calculated the cumulative risk for bleeding at the 5 year and 10-year follow-up points. For large aneurysms (more than 10 mm in diameter) they found the risks for bleeding to be 7.5% and 22%. For small aneurysms (less than 10 mm) that bleeding risk was 4.5% and 13.9% at the 5- and 10-year point in the study. The authors concluded that with a 3-fold increase of the risk of bleeding in just 5 years regardless of the size of the aneurysm and a higher risk for larger aneurysms, the neurosurgeon is justified to intervene by treating the asymptomatic aneurysm on a preventative basis.

Another interesting study from Turkey showed that one important, but neglected factor in the development of aneurysms of brain arteries is when high blood pressure is not controlled (Ref. 6). These authors found that the incidence of uncontrolled high blood pressure prior to a subarachnoid hemorrhage was almost double compared to normal controls. They suggested the following sequence of events that lead to the development of aneurysms: The uncontrolled high blood pressure leads to a closing off of the nutritional small blood vessels that supply the arterial wall with nutrients. This leads to a loss of the normal collagen and elastic material in the arterial wall in a focal area. Subsequently the continued pressure inside the artery leads to the pouch of the aneurysm, which in time grows larger until it ruptures.

Measure your own blood pressure intermittently

This new insight makes it very important for patients to measure their own blood pressure to help reduce the incidence of the complications of intracerebral and subarachnoid hemorrhages.
Family members of patients who had a SAH have a 5 to 12 times greater risk of developing SAH themselves.
Known risk factors for SAH are: smoking, high blood pressure, pregnancy, the use of the birth control pill, cocaine use. Women at an age 55 and older have a 25% higher risk to develop SAH than men of the same age (Ref. 12). 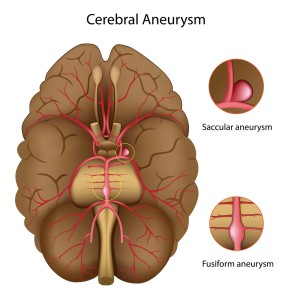 With the actual rupture of a brain aneurysm there is an acute onset of a severe headache (in about 97%). It is usually described as the “worst headache of my life” (Ref.12). Associated with this would be a change of consciousness, which is more severe, the larger the hemorrhage is. As the pressure inside the skull builds up from the bleed (elevated intracranial pressure), such symptoms as vomiting, changes in pulse rate and respiratory rate occur. Other symptoms such as dizziness, confusion, a seizure and eventual loss of consciousness develop in the next few hours.

According to Ref. 12 the most frequent cause of SAH is trauma to the head. In cases without trauma 75 to 80% are due to a spontaneous rupture of a cerebral aneurysm. Other causes can be sickle cell anemia, cocaine abuse, thickened blood (coagulopathy) or a pituitary stroke (apoplexy).
Time is of essence as with quick action, a fast CT scan, and a fast referral to the neurosurgeon hopefully the bleeder can be identified and either be stopped from bleeding through angiographic means or else by neurosurgery.

The initial test usually is a CT scan, which will be positive in 95% of cases within 24 to 48 hours. A lumbar puncture is often also done as this will show the presence of abnormal blood, even in those 3% cases where the CT scan looks normal despite the presence of SAH. However, as the blood vessels are affected with the development of a structural change, angiography is used in almost all cases. This test involves the injection of a substance, which shows up on X rays (radiopaque). This way the radiologist can detect all of the blood vessels of the brain as aneurysms occasionally happen simultaneously in several cerebral arteries.

Without intervention about 35% of patients with a ruptured aneurysm die with the first bleed. Another 15% die within a few weeks from another rupture. Because of these unfavorable statistics it is important to be aggressive in terms of preventative therapeutic intervention than done in the past.

A study, which comes from Paris/France, ( Ref. 7) demonstrated on 395 consecutive patients that with either endovascular coiling (75% of patients) or conventional surgical clipping (25% of patients) a total success rate of 98.8% can be achieved. The authors followed these patients for 3 years in intervals and they had to retreat only 6% of the patients. The mortality rate from the procedures was only 4.8%. Considering the overall poor prognosis without intervention, these figures are encouraging and support the authors’ conclusion that either a neurosurgical clipping or an angiographic coiling procedure can improve the otherwise poor survival statistics.