Nuts Protect You From Heart Disease

The research data was based on three large cohort studies, which involved low-income American and Chinese workers. Previous studies involved well-to-do Americans and mostly Caucasian individuals. These present studies involved all races and large numbers of people, 71,764 Americans and 134,254 Chinese. There was a clear correlation of consuming nuts with lower death rates from any cause and in particular lower death rates from heart disease. The age of the Americans was between 40 and 79 years, the Chinese were aged 40 to 74. The Americans included 50% of peanuts, the rest tree nuts. Technically peanuts are a legume food, but they also contain healthy oils and were found to have the same effect of protecting from heart disease as nuts do.

The three studies with follow-ups ranging between 5.4 and 12.2 years showed a survival benefit of between 17% and 21% as a result of nut consumption. Heart disease rates were down between 30 and 40% for all ethnic groups. There was a 23% reduction in ischemic and hemorrhagic strokes for all ethnic groups and it did not matter whether the participants of the study were obese or slim. What did matter were how many nuts they ate.

What are these heart-healthy ingredients of nuts or peanuts? They are unsaturated fatty acids, phenolic compounds, fiber, vitamins, phytochemicals and arginine. They have anti-oxidative and anti-inflammatory properties as well as endothelial stabilizing effects.

A similar study from September 2014 assessed the effects of a Mediterranean diet with either olive oil or nuts to a control group on a low fat diet in terms of risk factors for heart diseases. 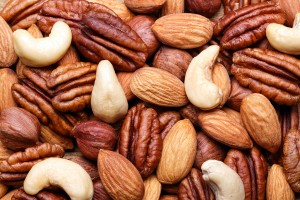 Nuts Protect You From Heart Disease

It is time to take a new look at your eating habits. Fat from nut sources are not the enemy to your health. In the past dietary suggestions preached the gospel according to whole grains and lots of them, and low fat was the buzzword. The results were not impressive, as heart disease and diabetes as well as obesity have spiraled high. The truth is that you need beneficial fats! It would be a mistake to now dip into the nut by the handful, but consuming an ounce of raw, unsalted nuts per day is contributing to your health.