It is important to note that since the mid 1990’s treatment  of AIDS has been improved substantially by applying the principles that came out of AIDS-research.

Surely, treatment should be monitored by an AIDS center, if at all possible. In this case the patient can be certain that the latest knowledge about AIDS treatment is incorporated into the treatment regimen. Notably, the principles of treatment are as follows.

As the HIV virus reprograms the infected cells (CD4 cells, endothelial cells, monocytes and brain cells) to produce new HIV RNA virus copies at a high rate, the treatment is directed against this new RNA virus synthesis. In fact, this is done by combining two antiretroviral drugs inhibiting HIV reverse transcriptase with one protease inhibitor, which is directed against HIV protease. A newer class of drugs, integrase inhibitors, has been added to this combination of anti-AIDS drugs known as the “cocktail” against AIDS. To point out, highly active antiretroviral therapy (HAART) is another name for the anti-AIDS cocktail.

For one thing, the anti-AIDS cocktail has to be taken regularly in order to gradually starve the HIV virus. Unfortunately, there are many possible treatment failures. Most commonly it is because patients get tired of swallowing pills or they don’t like the side-effects. Also, they fail to seek the advice of the treating physician who could switch them to another medication that may be more tolerable. Another key point, it could also be that resistant strains are developing. The treating physician can monitor for all of this by checking the plasma HIV RNA levels in the blood. That is to say, any level of more than 400 copies per milliliter is now accepted by many AIDS experts to mean that treatment needs to be stepped up after fist checking that the patient had taken the medicines regularly (Ref. 1, p. 1321 and Ref. 2, p. 7). 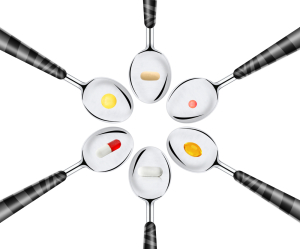 Some drugs directed against HIV

Surely, if the initial three drug cocktail is not effective in reducing the viral load, then the specialist has several other options of treating. Truly, one option is to increase the number of drugs in the cocktail. Certainly, another option is to change the drugs to some of the newer drugs that would cover for resistant strains.

Another key point, the emergence of resistant strains will always be a problem with treatment of AIDS as there is such a huge turnover of viral copies in the beginning of the disease. It is then that mutagenesis will create small subpopulations of resistant HIV sub strains, particularly in the presence of antiviral drugs.

Remarkable improvement with the introduction of protease inhibitors

It is important to realize that with the introduction of the protease inhibitors there has been a remarkable improvement in survival rates. However, despite the introduction of yet a new class of antiviral drugs in the form of an HIV-1 infusion inhibitor (Fuzeon or T20) it is clear that resistance will likely always remain a limiting factor (Ref. 5). Indeed, overall this has led to a 20 to 25% survival advantage, but costs, injection site reactions and the need for twice per day injections by the patient lead to a 10% discontinue rate.

Here is a website that lists the latest on HIV treatment and research.

Another key point apart from treatment of the HIV virus is that the physician must address the multiple possible opportunistic infections. Surely, the worst of them might be tuberculosis, which the physician has to treat as I described under this disease heading. Certainly, the physician needs to treat Candidiasis  as well as diarrhea from Clostridium difficile or Salmonella. That is to say, in the case of recurrent genital herpes or herpes zoster the appropriate maintenance antiherpetic antibiotic has to be taken in addition to the anti-AIDS medicine.

Side effects of treatment against AIDS

As important as effective treatment of AIDS is, one cannot overlook the toxic effects of some of the medications that are used to combat this disease. Doctors are always aware of the importance of balancing the benefits of a therapeutic intervention against the negative side effects of it. With AIDS treatment the relationship between benefits and harmful side effects of the medications used to treat is even more important as AIDS treatment can potentially span over several decades and some side effects are quite significant. Also, resistant strains of AIDS are always developing. Protease inhibitors, not long ago thought of as the cure-all for AIDS, turn out to have significant drug side-effects of increasing fatty substances (lipids) in the blood and causing diabetes mellitus.

Side effects of fusion inhibitors

It must be remembered that fusion inhibitors cause damage to body cells that contain large amounts of the energy packs, called mitochondria, such as in liver cells and fat cells. With this in mind, the end result after 18 months of fusion inhibitors in many patients is a starved look. This is due to the fact that the body fat melts away through a process called fat dystrophy. The end results are higher risks of heart attacks and strokes and the need for more medications to attempt to treat these side effects with statins, lipid lowering agents and insulin for diabetics. Clearly, this type of complex therapy is best done in close contact with a University Center that specializes in AIDS treatment (Ref.5).