Symptoms of AIDS are varied and can easily be mistaken for other illnesses.

Approximately 1 to 4 weeks after infection with HIV a certain percentage of patients will develop acute retroviral syndrome (primary HIV infection). They complain of painful joints, a fever,skin rashes and lymph node swelling. This may resemble a flu or mononucleosis. A few weeks after this syndrome disappears the patients develop antibodies to HIV. The lymph glands stay enlarged, the patients are now asymptomatic HIV carriers. When the immune system is weakened enough after often several years of this asymptomatic state, there are other symptoms and signs that occur as follows (Ref. 1, p. 1316 -1318).

Below the most common symptoms of AIDS are compiled for ease of reference.

Common signs and symptoms of AIDS

Aseptic meningitis: This may manifest itself by headaches, light sensitivity and fever. Lumbar puncture is needed to further investigate.

Encephalitis and opportunistic brain infections: It is not uncommon to have either an HIV or CMV(=cytomegaly virus) infection of the brain tissue as the body’s immune system weakens. Confusion, loss of memory, headaches, myoclonic seizures, followed by developing dementia are symptoms that point in that direction. Often both CMV and HIV can infect the brain together . Toxoplasmosis encephalitis or cryptococcal, histoplasmal and tuberculous meningitis are some of the opportunistic infections of the brain or the meningeal membranes that can occur with AIDS.

Brain tumors: Primary non Hodgkins lymphoma leads to focal symptoms depending on which of the cranial nerves is affected. Otherwise systemic lymphomas like to affect the CNS secondarily. 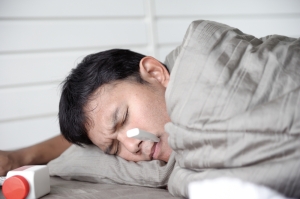 Skin symptoms: Often there is an intermingling of HIV and other skin infections, particularly with genital chancroid ulcers, frequently recurring genital herpes lesions or recurrent herpes zoster. Any of these occurrences, skin yeast infections or any other skin lesions that do not want to heal point to the possibility of underlying AIDS. Kaposi’s sarcoma is a purplish papule in the skin, which is caused by herpes virus type 8, but facilitated by HIV through inhibition of the immune system.

Oral symptoms: Chronic thrush from Candidiasis, recurrent herpes simplex lesions, hairy white patches of skin on the side of the tongue (from Epstein Barr virus infection) are all indirect pointers to do HIV blood tests on these patients and a high percentage of these patients will have AIDS. Kaposi’s sarcoma often also occurs in the mouth or on the pharynx as a painless, purplish mass.

Gastrointestinal symptoms: One of the most common symptoms of AIDS patients is chronic diarrhea and abdominal pain, which can be present for a variety of reasons. Candida albicans infection, cytomegaly virus infection (=CMV), Salmonella and Clostridium difficile are only a few of the problem bugs that contribute to chronic diarrhea. Sometimes these pathogens coexist in the AIDS patient. The biliary tract can be chronically infected by cryptosporidium or CMV. Pancreatitis and hepatitis can be induced by some of the medicines that the AIDS patient has to swallow to combat these infections.

Lung symptoms: The most common infection with AIDS is tuberculosis, but this may get masked by the other pathogens that can be present at the same time. Pneumonia with otherwise rare pathogens such as Pneumocystis carinii, Histoplasma, Cryptococcus, Aspergillus and Coccidiosis species are common. In IV drug users bacterial pneumonias with such as Pseudomonas, Haemophilus and pneumococci are common. Lung metastases from Kaposi’s sarcoma and non-Hodgkins lymphoma can occur as well. Symptoms are varied like coughing, coughing up copious amounts of phlegm, fever, shortness of breath and bluish discoloration from lack of oxygen uptake.

Cardiovascular symptoms: With IV drug users there can be a fulminant infection in the heart valves (bacterial endocarditis), which leads to a fever and sometimes to strokes. The physician will hear a heart murmur. At times blood appears in the urine from clots in the kidney. A cardiomyopathy can also be caused by HIV, which leads to congestive heart failure. The symptoms of this are slowness of body movements, difficulties climbing stairs due to shortness of breath, and poor skin color from lack of oxygen perfusion.

Kidney symptoms: Kidney involvement is rare, but in blacks it is not uncommon, particularly among heroin users. It is due to a so-called HIV-associated nephropathy, where some capillaries of the filtration devices (glomerula) collapse and the kidneys get enlarged. They are not doing their job of filtrating out the toxic substances from the blood, which leads to tiredness and leakage of protein into the urine, which can be measured along with blood tests. The kidneys deteriorate within only a few months to end stage kidney failure. Unfortunately the prognosis is very poor.

Neurological symptoms: These symptoms are often found early and can consist of cognitive problems, seizures, gait problems, pressure on peripheral nerves with loss of sensitivity or motor function problems.