Tuberculosis was a common cause of Addison’s disease in the past and still is now in development countries. However, in the US today the common cause in 70% of cases is an autoimmune process, which may be associated with industrialization.

This leads to a melting away of the cortex (called atrophy of the adrenal cortex). It occurs in about 4 per 100,000 of the US population, in all ages and equal sex distribution. It usually becomes apparent during periods of stress such as after surgery, trauma or major endocrinological stress (for instance diabetic coma etc.). However, occasionally a medication such as the antifungal ketoconazole may cause this condition. In this latter case this happens through chemical blockage of steroid synthesis (Ref. 4, p. 101).

Due to the lack of aldosterone there is a severe electrolyte disturbance with potassium being elevated in the blood and sodium being lost along with water in the urine. The end result is severe dehydration and weight loss. Blood pressures are extremely low and eventually lead to circulatory collapse. With the cortisol deficiency there is insufficient carbohydrate formation and this is a cause of hypoglycemia. The heart has decreased cardiac output, which manifests itself in weakness.

There is a weak immune system, which results in frequent infections. There is hyper-pigmentation of the skin (bronze color appearance) from ACTH overproduction due to the diminished negative feedback to the pituitary gland. This due to the missing adrenal gland hormones that would normally keep ACTH production in check. The hyper-pigmentation is in all areas of the skin, sun exposed and not sun exposed, which is a diagnostic clue. Black freckles on the forehead, the neck and shoulders are also common. The naturally darker areas of skin such the area around the nipples of the breasts, the inside of the mouth, rectum and vagina often turn bluish/black. Lack of appetite, vomiting, diarrhea and nausea may be misleading the patient and physician to think that something is wrong in the gastrointestinal tract, when in reality this is a severe hormonal problem associated with a metabolic disease. 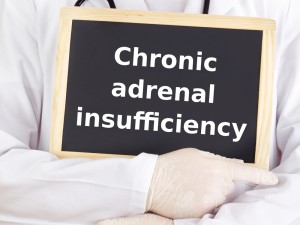 When blood tests, ECG’s and X-rays are taken, the abnormalities are often so striking that the diagnosis is apparent or that additional tests or referrals to a specialist are done that lead to the diagnosis quickly. The serum sodium is low, there is a high potassium level and a low blood sugar level; bicarbonate levels in the blood are low and the kidney function tests show an elevated BUN value. X-ray films show often calcified adrenal glands and there may be tuberculosis in the kidneys or lungs. Hormonally, ACTH levels and renin levels are increased. The specialist likely will consider many more tests when the initial diagnosis of chronic adrenocortical insufficiency has been established.

This is important, because it has to be established whether or not the insufficiency of the adrenal glands is due to a primary process within the adrenal glands or whether the adrenal glands are merely secondarily affected as a result of a pituitary gland tumor that led to a deficiency of ACTH stimulation. In the case of tuberculosis or an autoimmune process leading to direct atrophy or destruction of the adrenal gland tissue the corticosteroid deficiency is the cause of the primary Addison’s disease (see above). Further testing including CT or MRI scans of pituitary gland and/or adrenal glands can help in distinguishing between these diagnostic possibilities. Further hormone stimulation or suppression tests through the endocrinologist are also useful with this distinction. The reason this distinction is important to make comes from the fact that treatment for these two conditions is significantly different.

For instance, in the case of a hypothalamic deficit of the CRH (=corticotropin releasing hormone) the CRH stimulation test would be positive, showing a release of ACTH from the pituitary and a response of cortisol from the adrenals in subsequent blood tests as a result of the CRH stimulus. This would guide the endocrinologist to the exact cause of the secondary Addison’s disease.