As the hormones are so diversified in their actions, the symptoms depend on which of the hormones is overproduced or missing.

A slowly growing pituitary adenoma, which is essentially a benign tumor of the anterior pituitary, will often first affect the gonadotropins, followed by growth hormone deficiency, and finally to hypothyroidism and low ACTH.

Due to the pressure of the adenoma on the optic chiasm that is in very close proximity to the pituitary gland, there is a characteristic visual field loss of the corresponding outside halves of the visual field on each side. The eye specialist calls this a bitemporal hemianopsia. Depending on what visual loss has occurred, conclusions can be drawn as to the location of the tumor.

This is a grave sign as even with successful surgery this visual field defect often does not return to normal. Other signs can be a different type of headache or a new pattern of headaches.

Signs and symptoms of hypothyroidism, similarly symptoms of dwarfism, which is due to GH deficiency are discussed under these headings. ACTH deficiency can be found under “Addison’s disease symptoms”. 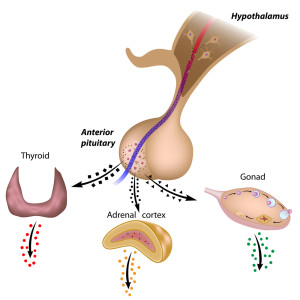 There are variations of symptom complexes in special circumstances. Things can become quite complicated when adenomas are hormone producing, such as ACTH producing tumors or growth hormone producing tumors. All of these cases need a thorough work-up by an endocrinologist. Eventually, if an adenoma of the anterior pituitary lobe has been confirmed, a neurosurgeon specializing in pituitary tumor surgery, needs to remove this tumor. This endoscopic procedure is also known as transsphenoidal hypophysectomy (note: the term “hypophysis” is synonymous with “pituitary gland”).