A study from Tufts University, Medford, Massachusetts has followed a cohort of the Framingham Heart Study for 7 years and published their findings on October 17, 2014. The study group consisted of 2,582 participants from the Framingham Heart Study Offspring cohort with an average age of 54. They were followed for 7 years. The researchers assessed their diet input and determined the amount of magnesium that each participant consumed on average. The results were interesting: the group who was healthy (no diabetes) was the one that had the highest intake of magnesium per day. In this group the probability of developing diabetes was 37% less than the risk of the group with the lowest magnesium intake. The researchers analyzed blood sugar and insulin levels, both of which are elevated when diabetes develops. Even those who already had developed high blood sugars and high insulin levels (prediabetics) had a probability of less than 32% of developing diabetes, if their magnesium intake was the highest compared to those whose magnesium intake was the lowest.

This demonstrates the importance of magnesium intake to prevent diabetes.

Adela Hruby and Nicola McKeown, the authors of this study stated that 50% of Americans do not get enough magnesium in their diet. Men need 400 to 420 mg magnesium per day and women need 310 to 320 mg of magnesium per day. Foods that are rich in magnesium are vegetables, fish, nuts and seeds, whole grains and dark chocolate. 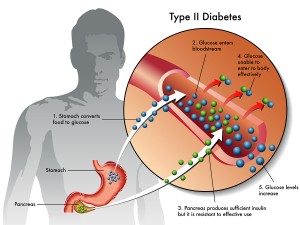