The center of the adrenal glands, where the catecholamines are produced, can develop an adrenal gland tumor, called pheochromocytoma .

Here is an autopsy finding from a patient who died from this endocrine tumor. You see the kidneys with a normal adrenal gland on one side and an abnormal tumor (pheochromocytoma) on the other side. This tumor produces epinephrine or other catecholamines. Although this tumor is mostly benign, the unpredictable release of large amounts of epinephrine (=adrenaline) can be life threatening leading to cardiac arrhythmias. In a minority of cases these blood vessels constricting substances can also be produced in other locations. It can turn to a fair size of 5-6 cm (2″ or a bit more) in diameter.

It occurs mostly in the 20’s, 30’s and 40’s. In about 90% of cases, it is found only on one side. However, there is a minority of cases, where a genetic defect of chromosome 10 has led to the MEN-IIA syndrome, there is a 50% occurrence of pheochromocytoma in association with a thyroid tumor (usually a medullary thyroid carcinoma) and hyperparathyroidism. As there are a multitude of endocrinological tumors the acronym “MEN” was coined, meaning “multiple endocrine neoplasia”. Contrary to what I just stated the pheochromocytomas occur on both sides in MEN-IIA patients in more than half of the patients. Also, there are several foci of hyperplasia (adrenal hyperplasia) that develop in the medulla of both adrenal glands. These patients have to be very closely followed by an endocrinologist as this is the precursor for an adrenal gland tumor.

The most common symptom is hypertension, which in about half of the patients happens suddenly and then disappears again. In the other half of patients, it is there all the time. It depends on the pattern of secretion of the epinephrine and other amine-like hormones into the blood stream. The heart beat might be rapid, the patient might feel cold and clammy, and a drop of blood pressure with postural changes (postural hypotension) might make the patient dizzy or faint. There are episodic periods of excessive sweating, heart palpitations and headaches.

Some abdominal symptoms like abdominal pain, nausea, vomiting or constipation might also be present. Breathing problems, visual disturbances, anxiety with a strong feeling of impending doom and loss of skin feeling in different regions could also be present. During an episode of high blood pressure attack extremely high readings of 230 over 150 millimeter of mercury might be found without too many other cardiological findings. In other words, there is a discrepancy between the severity of blood pressure elevation and the relative absence of angina or heart enlargement (=cardiomegaly). 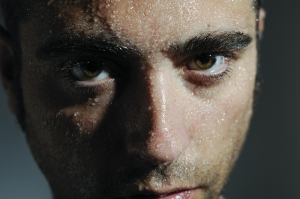 The mainstay of testing is a 24-hour urine test of VMA (vanillylmandelic acid) and metanephrine. These are the main metabolites of epinephrine in the urine. In pheochromocytoma patients the VMA and metanephrine tests are markedly elevated.

With a hypertensive crisis, the physician will utilize phentolamine by infusion, which usually reduces blood pressure dramatically in a patient with a pheochromocytoma, but not so much in cases due to other causes.

The method of choice is surgical removal of the pheochromocytoma, if it is located on one side.
The endocrinologist will carefully prepare the patient for this surgical procedure with alpha-blockers such as phenoxybenzamine or labetalol, which blocks alpha and beta receptors thus stabilizing the blood pressure and preventing a hypertensive crisis during surgery. In a high percentage this surgery will be curative. Sometimes the physician needs to keep an eye on the blood pressure and treat hypertension, if it persists, accordingly.
With malignant metastatic pheochromocytoma combination chemotherapy has to be given, but the long-term outlook for these cases is guarded.