First, the most common form of hypothyroidism (medically termed “myxedema”) is due to a burnt-out Hashimoto’s thyroiditis, a common autoimmune disease where autoantibodies lead to a chronic inflammation and eventual fibrotic transformation of the thyroid gland.

Furthermore, this may be associated with a goiter, but most often shows no change in size of the thyroid gland. Aging can also lead to hypothyroidism when the thyroid gland runs out of thyroid hormone production.

Thirdly, there are two types of hypothyroidism, primary and secondary. The symptoms are identical, but with primary hypothyroidism the reason for low thyroid production is at the level of the thyroid gland itself. With secondary hypothyroidism there is a lack of either thyrotropin-releasing hormone(TRH) from the hypothalamus or low thyroid stimulating hormone (low TSH) from the pituitary gland, which leads to a lack of stimulation of the thyroid gland. It is important to carefully investigate the patient and for the physician to do appropriate testing before therapy is instituted.

To clarify, hypothyroidism symptoms can be very difficult to notice in the beginning. There is a lack of energy. The patient develops a hoarse voice and slow speech. Also, the facial appearance changes due to eye puffiness and around the mouth (lip swelling) from abnormal mucopolysaccharide deposits in these tissues.

In addition, brittle dry hair, coarse hair and general hair loss are common. Often there is thinning and a loss of the temporal aspect of the eyebrows on both sides. In like manner, skin dryness and skin thickening develop and weight gain occurs from fluid retention and a slowing of the metabolism. Likewise, depression and hypothyroidism are commonly linked, but depression is often overlooked in hypothyroidism. The danger is to consider this symptom in isolation and to start antidepressants, which will not help as the real reason behind this type of depression is hypothyroidism, which requires thyroid hormone replacement, not antidepressants. With severe hypothyroidism there can be a psychotic state, which is called “myxedema madness”. Again it is a challenge for the physician and psychiatrist to recognize that these symptoms are only part of the whole symptom complex of hypothyroidism.

One cause of low body temperature can be hypothyroidism and other symptoms are a swollen tongue and discoloration of hands (yellow palms) and the soles of the feet. Hypothyroidism is one of the causes of bradycardia (slow heart beat) and heart enlargement (fluid accumulation around the heart) can also be caused by it. Fluid can also accumulate in the chest cavities (pleural effusions) or in the abdominal cavity (ascites fluid). This is due to protein leakage, which is characteristic for severe hypothyroidism. Swelling inside the carpal tunnel space of both wrists and in the tarsal tunnel space around both ankles leads to a loss of feeling (=paresthesias) of both hands and feet. There is a slowing of the reflexes and this causes carpal tunnel syndrome symptoms and symptoms of tarsal tunnel syndrome.

Prolongation of menstrual periods and anemia

In women of childbearing age there is a prolongation of the menstrual periods (one of the causes of menorrhagia), which can result in pronounced anemia. However, generally speaking with hypothyroidism anemia the hemoglobin is in the range of about 9 to 10 g/dL. It takes often 7 to 9 months after correction of hypothyroidism with thyroid replacement before this anemia normalizes. Slow thinking is another symptom separate from depression. Patients with hypothyroidism complain that the room temperature would be too cold, even in a normal environment. 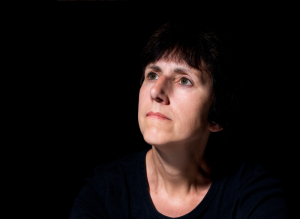 A life threatening complication of hypothyroidism is the “myxedema coma“. This can occur in patients who have been hypothyroid for a long time. They may slip into a coma, either on their own or precipitated by an infection, by a central nervous system suppressant drug or by exposure to cold temperatures. This coma is characterized by an extremely low body temperature of 25 to 32°C (=76 to 90°F), missing reflexes, depressed breathing activity and seizures. There is a high mortality rate associated with this condition and an endocrinologist should attend to this endocrinological emergency. 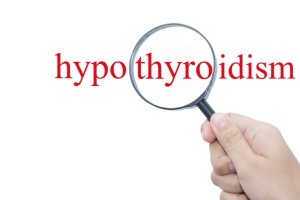 The most important blood test for hypothyroidism is the TSH level. The pituitary gland secretes this hormone and it there is an elevation of TSH the case of primary hypothyroidism. However, if it is low, then this points to a secondary cause (either pituitary gland or hypothalamus related). Notably, these patients need an urgent referral to an endocrinologist who will do further testing.

In the past the endocrinologist may have occasionally ordered a TRH stimulation test, where synthetic TRH is injected. If this leads to a response of TSH, the patient has a deficiency of the hypothalamus. If there is no response, there would be a lesion at the pituitary gland (usually an adenoma). Further clarification can be obtained from an MRI scan of both the hypothalamus and the pituitary gland. In more rare cases, there can be a genetic defect of some of the thyroid hormone synthetic steps within the thyroid gland or a defect of thyroxin-binding globulin capacity. Certainly, with primary hypothyroidism there is often a high cholesterol level. T4 levels are usually low, but T3 levels are mostly normal. Only in severe hypothyroidism is there both a low T3 and T4 level.

Replacing the missing thyroid hormones treats hypothyroidism. The physician orders thyroid pills once per day in the morning so that a routine to establish a routine and to help the patients to not forget the medication. There are various thyroid medications such as purified T4 hormone, called levothyroxine (brand names: Eltroxin, Levotec, Synthroid). Thyroid hormone can also be given as desiccated thyroid (brand name: thyroid hormone Parke-Davis), which contains both T4 and T3 hormones. For patients with a genetic enzyme defect an endocrinologist needs to be consulted to provide a specific hormone replacement schedule. Myxedema coma should also be in the hands of an endocrinologist, who will initially use fairly high thyroid hormone replacement doses, which are then gradually tapered to a maintenance program. In the initial stages intubation and artificial breathing with a respirator may be required for a period of time.

At the other end of the extremes is subclinical thyroid dysfunction, which is characterized in the lab tests by an elevated TSH and normal T3 and T4 hormones. This is common in elderly women, particularly if there has been a history of Hashimoto thyroiditis in the past. The physician measures thyroid peroxidase antibodies in these patients to confirm Hashimoto’s autoimmune thyroiditis. These patients need replacement with thyroid hormone on an ongoing basis. The physician must watch other patients with this condition closely to see whether their hormone levels stay normal or drop, at which time they need hormone replacement.

The sad story in the past was, before these sensitive TSH monitoring tests were available, that the patients entered into a deep depression due to hypothyroidism and died from suicide as a result of the intractable depression or else suddenly died of a myxedema coma. Even today there is the occasional patient who is living in denial and refuses to see a doctor.

Today the problem is not how to diagnose hypothyroidism, but to convince the patients that they have a condition, which will require lifelong thyroid replacement.

The challenge is to overcome non-compliance and persuade the patient to take the thyroid medication on a regular basis!

There is a group of patients who have no classical signs of hypothyroidism, but who are perhaps chronically tired and who have a borderline elevation of their TSH test. This constellation happens in about 15% of elderly women who have or had underlying Hashimoto’s thyroiditis (Dr. Hashimoto described this syndrome first). They have subclinical hypothyroidism, which would turn into full blown hypothyroidism in later years. Special tests (=peroxidase antibody titers) are often positive and these patients should receive replacement L-thyroxine therapy (Ref. 3, p. 96). Many of these women when they present in the child bearing age have a history of pregnancy loss as is discussed in this reference. Careful thyroid replacement will allow these women to have normal pregnancies. Hyperthyroidism can also cause pregnancy loss.

With the anti-aging movement well on its way due to Suzanne Somers’ books (like Ref. 16 and 17) and others, I like to point out that hypothyroidism can often be the first sign of the “change of life” in women (menopause). In males this typically is not as sudden as in women and often occurs 5 to 10 years later in life. Other factors also play a role such as stress (move, divorce, debts, death of a loved one etc.). Stress increases cortisol levels and the thyroid simply “burns out” (there is normally a balance between the thyroid hormone gland and the adrenal gland. The adrenal glands manufacture cortisol.

Do blood tests to check for thyroid deficiency

So, in the age group above 30 it is wise to do blood tests (a whole battery of hormones and DHEA-S) to determine what else is low other than the thyroid hormones. A common occurrence is the presence of high fasting insulin levels and low cortisol levels. The physician should address this head-on, and if uncomfortable, refer to one of the anti-aging physicians.