The most common adrenal gland dysfunction is adrenal fatigue, a hormone weakness with varying degrees of reduction in the function of the adrenal glands. Ref. 16 deals with this condition in great detail. Here I am only giving an overview of this condition. Our adrenal glands are situated above the kidneys. These hormone glands have a circadian rhythm with the highest amount of adrenal gland hormones being produced in the morning and a gradual decline throughout the day. Our meals (breakfast, lunch and dinner) as well as any snacks lead to mini peaks of the adrenal gland hormone production. If we get enough sleep, there is no excessive stress in our lives and we do not smoke or abuse alcohol and drugs, most people will not know that they have adrenals as they are quietly working in the background.

However, when allergies develop to a large amount of food components, you catch every flu that goes through the community. Your energy leaves you mid afternoon for the rest of the day. This is a sign that adrenal fatigue is probably setting in. When this is not attended to, a full-blown collapse can occur as a result of adrenal gland failure developing. This is also known as Addison’s disease. It appears that there are several possible causes of adrenal fatigue. Any prolonged stress reaction that results in prolonged ACTH stimulation of the adrenal glands can lead to of adrenal glands exhaustion. Food allergies often also seem to cause or contribute to adrenal gland fatigue. Several severe emotional stresses and/or mental disease will be able to overproduce ACTH production.

Junk foods, skipped meals and poor life style choices (drinking habit, drug abuse, smoking, lack of sleep and excessive caffeine intake) will also produce adrenal gland fatigue as this leads to failing hormone production of the adrenal glands. According to Dr. Hertoghe (Ref. 18 and 19) adrenal fatigue and adrenal insufficiency (Addison disease) can be part of a general hormone disbalance. Patients may be found to be hypothyroid as well and perhaps test vary low when IGF-1 (=somatomedin C) is tested. This indicates insufficiency of growth hormone production, which is particularly common after the age of 60. Male and female sex hormones are frequently found to be low as well.

There are a variety of symptoms that are associated with adrenal gland fatigue. Dr. Wilson has provided a test where you can rate yourself to see whether you likely suffer from this condition (Ref. 16). In the questionnaire such symptoms as dizziness, faintness, excessive drowsiness (particularly after eating) and insomnia are listed. Various symptoms in the ears, nose or throat can be present, for instance a runny or stuffy nose, blurred vision, ringing in the ears, a fullness in the ears and hearing loss, a sore throat, gagging and canker sores; recurrent sinusitis, chronic itching of the roof of the mouth and a chronic cough may also be present. Heart palpitations or an increased heart rate (between 85 to 100 beats per minute resting), chest congestion, frequent hoarseness and asthma can also be symptoms of adrenal fatigue.

Gastrointestinal symptoms include vomiting, nausea, diarrhea, belching, bloating after meals, passing gas (flatulence), abdominal pains or cramps and feeling full long after having had a meal.

Other symptoms of adrenal fatigue

Other symptoms may affect the urinary/genital area as for instance urinary frequency or urgency, vaginal itchiness or vaginal discharge. Excessive hunger or binge eating can also be a symptom of adrenal fatigue. Psychological symptoms can be anxiety, depression, irritability, lethargy, cravings, aggressive behavior, confusion, restlessness, difficulties to concentrate, learning disabilities, slurred speech, stuttering and others. Even a vague symptom of cloudy thinking or fogginess can be a symptom of adrenal fatigue. You can take the test to determine whether you likely have adrenal gland fatigue and then read more details in Ref. 16. 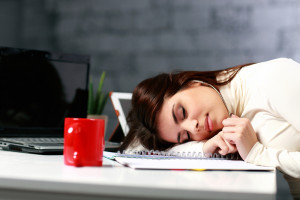 There are clinical tests and hormone tests that can be used to determine whether or not a person is suffering from adrenal fatigue.

Other tests for adrenal fatigue

Treatment for adrenal fatigue consists of a comprehensive holistic approach. To regain your energy you need to pay attention to changing your lifestyle, watch closely what you eat and drink and pay attention to your thoughts stresses in your life. Getting regular breaks and a good night’s sleep is all part of the therapy in addition to vitamin and mineral supplements. The adrenal glands need a lot of vitamin C to produce the adrenal gland hormones. In addition the patient requires vitamin B complex as well as salts (table salt and magnesium). The patient also requires trace minerals (zinc, manganese, selenium, molybdenum, chromium, copper and iodine) for the adrenal glands to function properly.

You need to eliminate sugar and refined carbohydrates (potatoes, bread, pasta, rice). Replace this with complex carbohydrates (lettuce, vegetables, and fruit) and add to this organic meat (lean chicken, buffalo, beef, lamb and pork). You need three meals a day (do not skip breakfast!) with snacks half-way through the morning and afternoon. You may also have a snack prior to going to sleep at night. In addition you need regular aerobic and anaerobic exercises 3 to 5 times per week. Ballroom dancing, swimming, walking are also acceptable as alternative exercising. You need lots of sleep (more than a non-adrenal fatigue person). Dr. Wilson gives details about supplements on this site where herbs, vitamins and minerals are premixed, so that it is easy to take.

The following herbs are useful in supporting the adrenal glands: Licorice root, Ashwagandha root and leaf, Korean Ginseng root, Siberian Ginseng root, ginger root and Ginkgo biloba leaf.
There are also herbs that are bad for the adrenal glands and need to be avoided: avoid Ephedra (MA HUANG), the cola nut, and strong black teas. As stated earlier, coffee and caffeinated drinks and sodas must be avoided. The only exception is green tea, which has adrenal gland supportive effects so that the small amount of caffeine can be tolerated by most except the ones with the more severe form of adrenal fatigue.

To stabilize severe cases of adrenal fatigue it is useful to use adrenal gland extracts. The treating physician may have to add small amounts of bioidentical cortisol (Cortef tablets) in more severe cases. A typical replacement dose of cortisol (=hydrocortisone) is 10 mg tablet of Cortef in the morning to mimic the diurnal variation and 5 mg with lunch and 5 mg with dinner. The patient takes this best together with adrenal gland extract. A physician knowledgeable in treating adrenal fatigue should supervise this treatment closely. At the end there has to be a gradual weaning process from the Cortef over several months. Sometimes this can take up to 2 years in order to avoid shrinking of the adrenal glands.

It is safe to give low dose natural cortisol

At the Anti-Aging Conference in Las Vegas (Ref.19) Dr. Hertoghe pointed out that it is perfectly safe to give low dose natural cortisol in smaller doses.  The dosage would be between 5 mg and up to 15 mg per day on an ongoing basis and there are no untoward side effects. He finds in his patients that growth hormone, thyroid hormone and/or sex hormone deficiencies are present simultaneously. These deficiencies must be treated as well to allow the patient to recover fully.