This type of kidney damage is due to small blood vessel disease from uncontrolled diabetes, which leads to decreased kidney function. Diabetic nephropathy develops when the hemoglobin A1C level has been more than 7% for a number of years. When diabetes control has been poor, irreparable kidney damage is caused in the filtration units, called glomeruli.

Eventually this will result in the need for kidney dialysis or a kidney transplant. On the other hand management of diabetes with a hemoglobin A1C of less than 7% will usually prevent this from happening. Also, the ACE inhibitor drugs captopril (brand name: Capoten) and enalapril (brand name: Vasotec) can be used to repair some of the glomeruli micro-damage to a large extend and also help reduce high blood pressure.

The eye damage from uncontrolled diabetes is called diabetic retinopathy. The retina of the eyes is another area where changes to the blood vessels are immediately detectable. The eye-specialist can see changes in the blood vessels long before they lead to complications such as swelling of the retina (= macular edema), proliferative changes, retinal detachment or retinal hemorrhage. Diabetic retinopathy from uncontrolled diabetes is one of the many causes of blindness. Again, it cannot be emphasized enough how important it is to control the blood sugars tightly with hemoglobin A1C values of less than 7%, as blindness from diabetes is preventable. 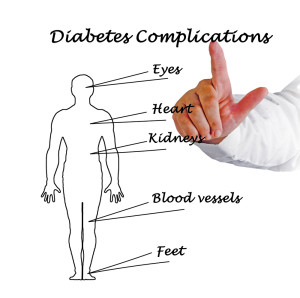 Nerve damage from diabetes is called diabetic neuropathy. When the small nutritional arteries that supply the nerves in the body with nutrients, get damaged from arteriosclerotic disease due to uncontrolled diabetes, neuropathy damage is noted in various parts of the nervous system:

This leads to circulation problems in the brain (strokes) and in the heart (heart attacks, serious arrhythmias and congestive heart failure). Unfortunately serious circulation problems result from this usually in the lower extremities, where circulation normally is not as good as in the upper extremities due to gravity (Ref. 7). The worst combination of circumstances exists in a person who is a heavy smoker and who also had uncontrolled diabetes for a number of years. Such a person has a high probability of developing Buerger’s disease (narrowing of the smaller and midsize arteries of both legs from smoking) and superimposed severe arteriosclerosis of the larger vessels in both legs as well due to the uncontrolled diabetes. Frequently this leads to amputations of a part or of the whole lower extremity on one or both sides.