The most common form of overproduction of the adrenal gland cortex is Cushing’s Disease and Cushing’s Syndrome.

The table below depicts this again. Sometimes, in a clinical setting, it can be very confusing as the clinical presentation of these two entities can look identical, but without further testing some subtle hints can be missed, which are essential to tell the physician how to treat the condition successfully. It is vital to be certain whether or not ACTH production is normal or elevated to distinguish the primary condition (Cushing’s disease) from the secondary condition (Cushing’s syndrome).

Hyperfunctions of the adrenal glands

The characteristic moon face (rounded) with obesity around the trunk and an association of muscle wasting in the extremities is the main presentation. Skin texture is thin and there are purple breaks in the skin (striae) on the abdomen like with pregnancy.

Other symptoms are an elevation of blood pressure, osteoporosis, kidney stones and proneness to infection. In children there is growth retardation (=lack of growth). In women there are menstruation irregularities. If there is an adrenal gland tumor and production of testosterone like substances, there can be body hair growth, premature male pattern baldness and male pattern hair growth in females. With pituitary adenomas headaches can occur and there is a danger of loss of sight because of optic nerve damage. 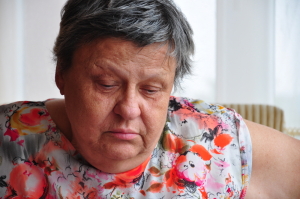 In a patient with an adrenal gland tumor producing cortisol the dexamethasone tests will not show suppression. Similarly, most Cushing’s syndromes with ectopic (= not in the pituitary gland produced) ACTH will also not show changes in cortisol production. This makes the dexamethasone test a handy tool to distinguish between a pituitary cause of Cushing’s disease versus a non-pituitary cause of Cushing’s syndrome. The other tests are used to further define these findings. Other tests used are CT and MRI scans of the pituitary gland and the adrenal glands. For more details on pituitary adenomas a gadolinium enhanced high resolution MRI scan shows more details.

Other blood tests are also done to rule out other hormone abnormalities including thyroid, growth hormones, gonadotropins and other adrenal gland hormones, particularly aldosterone.

In the beginning the patient with a pituitary adenoma needs to be stabilized prior to surgery. This can be achieved with ketoconazole, which is an antifungal medication, but has a cortisol inhibiting effect.

In about 70% the pituitary adenoma can be removed by a skilled neurosurgeon who does a lot of these procedures. The best results seem to occur with microadenomas of less than 1 cm (= 0.4″) in diameter. The approach is through the sphenoid sinus, which is located just underneath the pituitary gland (=”transsphenoidal partial hypophysectomy”).

After this procedure the patient is in the Intensive Care Unit and is closely observed. The procedure is mostly very well tolerated and can be done during pregnancy as well. However, there is about a 20% recurrence rate as any cells that stay behind can regrow into another ACTH producing adenoma. It is a benign tumor, but it is potentially harmful, as in the past without removal it has caused partial blindness in many people. The pituitary gland is in close proximity to the optic nerves, where they cross and then disappear into the brain. Pressure on his vulnerable spot by an enlarging pituitary gland can cause a lot of harm.

If the tumor has been removed, but subsequently regrew, often a total hypophysectomy (= removal of all of the pituitary gland) is done. Alternatively the specialist might decide to ask a radiotherapist to irradiate the pituitary gland with crossing external radiotherapy beams. It can take several months for the full effect of radiation to occur, which is followed with serial blood tests.

Occasionally the patient who does not respond to all these measures might have to have both adrenal glands surgically removed (= bilateral adrenalectomy). The endocrinologist will closely monitor this patient, as the patient now needs careful hormone replacement similar to a patient with Addison’s disease. Other potent medications are available, but the endocrinologist would follow the patient on an ongoing basis with blood tests.