Fat, good and bad fatty acids is a rather voluminous topic. Fat has been looked at with caution, and it has often been perceived as the villain.

There has been a perception, that fat is the “bad guy”, the enemy that is responsible for obesity, heart disease, clogged arteries and other ailments. A lot of products line the supermarket shelves and proclaim that they are “no-fat” or “low-fat” or “cholesterol-free”.

First of all it is necessary to realize that there are fats that are essential and vital for us. As mentioned before, our bodies need to have essential fatty acids, as it cannot make them out of other nutrients. There are fats, which are beneficial, and a small amount in our food plays a role to slow down the entry of carbohydrates into the bloodstream.

It also sends hormonal signals to the brain: we feel satiated and no longer hungry. As a sensible rule of thumb we should not exceed 25% to 30% of our caloric intake from fat!

A group of “good” fats are called monounsaturated fats. They occur in olives or in olive oil, avocados, almonds and macadamia nuts.

Next there is the group of the polyunsaturated fats, which are divided into two groups:

2. Then there is the sub-group containing omega-6 fatty acids, occurring in corn oil, sesame oil, and grape seed oil. They need to be balanced by omega-3-fatty acids or they could lead to inflammatory conditions like arthritis (Ref.7,262). 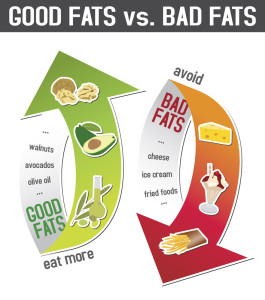 It is the saturated fats, that are the “bad” fats. They occur in animal fats like butter, lard, and dairy fat, but they are also found in tropical oils (palm oil or coconut oil). The following table was summarized by me from data of Ref. 3, p. 108-109).

Fat, the good, the bad and the ugly

Unfortunately there is another group that is the worst of them all, those fats which contain trans fatty acids. They are called trans fats and are like the new bad kid on the block: before the 20 th century they did not exist.

They were developed in an effort to transform liquid oils into a spreadable fat. This way margarine was created. Also, the shelf life of products containing trans fats is longer. This way, butter, which is an animal fat that forms the bad cholesterol, plugs up arteries , and leads to heart attacks and strokes was replaced. It certainly was cheaper than the expensive butter,also it did not turn rancid like butter, but the trans fats in the margarine are even worse than the fat in butter.Trans fats raise the bad cholesterol and at the same time lower the good cholesterol, which is a double whammy to wreak havoc with our health!

Despite all the claims that some margarines are lower in trans fat than others and are labelled “heart healthy”, be aware that trans fats at this point don’t have to be listed on food labels. If you read the word “hydrogenated“, it means “bad trans fats“!Foods with high trans fat levels are best avoided altogether: deep fried foods like french fries, chips or nachos are on this list. Cookies, pies and snack foods are also on the “not wanted” list. A wide range of commercial bakery products are prepared with shortening. The harmless sounding term “pure vegetable shortening” is a trans fat and not harmless at all!

The do’s and don’ts about fat intake 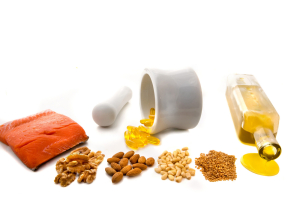 Fish oil (omea-3-fatty acids) has been shown to stop inflammation and as such is good for all the chronic inflammatory conditions like cardiovascular disease (prevention of strokes and heart attacks, lowering blood pressure), arthritis, metabolic syndrome associated with obesity, lung diseases like asthma and COPD, Alzheimer’s disease, Parkinson’s disease, and even cancer (breast cancer, prostate cancer, colon cancer and lung cancer; Ref. 8, 12, 13).
It turns out that the aging person is no longer producing natural substances, called pro-resolution molecules like lipoxins, resolvins and protectins, which help to overcome chronic inflammation (Ref.11). This is what causes the aches and pains in aging people and what causes the above mentioned diseases. Omega-3-fatty acids elevate lipoxin and resolvin levels (Ref.9). This is the reason why omega-3 fatty acid supplements have anti-inflammatory properties and why they are useful in the above mentioned diseases. Not only are they helpful for prevention, but also to immediately stop inflammation.
In the past small amounts of aspirin (ASA) were recommended to prevent heart attacks and strokes, but this is associated with serious side-effects like bleeding ulcers. Fish-oil (omega-3-fatty acids and DHA) has been proven to be more effective in controlling inflammation than ASA with no side-effects (Ref.10). Ref. 12 and 13 lists 102 references that support the effectiveness of omega-3-fatty acids in lowering blood pressure in obese patients, reducing heart arrhythmias in diabetics, improving survival in patients with heart failure, reducing triglyceride levels and improving the function of the lining within the blood vessels. Lung disease and asthma are improved dramatically with 1000 mg/day of EPA and 2000 mg/day DHA from fish oil, which showed a reduction in inflammatory substances known as cytokines (Ref. 13). Cognitive function is improved in patients with Alzheimer’s disease and Parkinson’s disease because of the production of protectins due to omega-3 DHA from fish oil. Ref. 12 and 13 describe these studies in more detail. Even cancer that is associated with increased chronic inflammation can be improved. For instance, 2000 mg/day of EPA was found to reduce abnormal crypt cells in patients who were at a higher risk for developing colon cancer and who underwent colonoscopies (Ref. 13).
In summary, omega-3-fatty acid supplements with EPA and DHA are a must, particularly in the aging baby boomer population. Doses should be in the range of 2 to 6 grams per day. The fish oil should be a high potency product -900 mg (=0.9 Gram) to 1000 mg (=1 Gram) per capsule -and should be molecularly distilled to remove mercury, cadmium, lead and PCB’s. Yes, it is the more expensive product. The latest push for consuming fish as a source of EPA and DHA avoids the thorny issue of the fact that the oceans now have reached serious levels of pollution with mercury, cadmium, lead and PCB’s. So, if you want to eat fish, you would have to also get intravenous chelation to combat the toxic by-products.