First of all, gastritis is a condition where the lining of the stomach shows inflammation. Generally speaking, it occurs typically from the late teens to old age. Still, children rarely develop it. Medically the lining of the stomach is called “mucosa”. Briefly, in the introduction to the next chapter on ulcers I am explaining that there is a fine balance of several factors regarding the integrity of the mucosa.

In sort, here is an example: a person with severe burns, with head trauma, kidney failure, liver failure or shock etc. produces extra amounts of acid. There is acid production from the stimulation of ACTH production (stress hormone). This also leads to a weakening effect of the repair mechanisms of the stomach mucosa. The weakening mucosa effect comes from the high cortisol of the adrenal glands.

For example, within only two to five days of such a major crisis as listed above acute stress gastritis will occur in a significant percentage. In addition, due to the use of non-steroidal anti inflammatory drugs (NSAIDs) for arthritis or sports injuries the rate of acute erosive gastritis has increased. Finally, alcohol abuse can cause the same thing, a weakening of the mucosa. On endoscopy this condition can be diagnosed by the presence of spots of erosive changes throughout the stomach, but confined to the superficial layers. As a result, there is submucosal (petechial) bleeding associated with it.

On the other hand, there is another form of gastritis, namely the non-erosive gastritis. This type of gastritis is associated with the bacterium H. pylori (=helicobacter pylori). Certainly, if this bacterium is not treated, this condition will develop further to chronic ulcers of the stomach and duodenum.

Equally important, after decades of infection it can even lead to stomach cancer (adenocarcinoma of the stomach). A point often overlooked is that in development countries H. pylori is very common. To clarify, children often acquire it there. Instead in the U.S. it is rare in children and more common in blacks and Hispanics than whites. It increases in frequency with age. It can be cultured from dental plaque and dental cavities, saliva and stool. You can find further comments about tests under “diagnosis” of the chapter on “gastrointestinal diseases/ulcers” below.

Non-erosive gastritis is a superficial inflammatory change of the mucosa. It shows characteristic inflammatory cell infiltration on biopsy specimens taken by endoscopy. These more chronic forms of gastritis need the skills of an experienced gastroenterologist. The specialist may over the years have to do several gastroscopies with various attempts to culture bacteria and to take brushing samples and cancer biopsies for histological analysis to rule out cancer. It may take several months of such testing before the specialist can give you a clear picture of what is going on inside.

Chronic gastritis can lead to three histological conditions: deep gastritis, gastric atrophy or metaplasia. Each of them have characteristic pathological appearances under the microscope and they have certain clinical significance as I will briefly mention.

First, deep gastritis often associates with H.pylori infection. That is to say, it needs treatment as untreated H. pylori likes to progress to chronic ulcers.

Second, gastric atrophy is often found in older patients and is associated with autoantibodies against the acid producing cells of the gastric mucosa. This in turn leads to vitamin B12 malabsorption, a condition known as pernicious anemia.

Third, metaplasia is found in some cases of severe atrophy and patches of gastric mucosa have been replaced with mucosa, which looks more like intestinal mucosa (“metaplasia”). This condition is important to watch as it can degenerate into stomach cancer.

With acute stress gastritis the patient is too ill to communicate any symptoms. The physician in the ICU setting might therefore do an endoscopy to see whether or not stress ulcers are present.

If acute stress gastritis is not treated promptly, there is a high mortality rate from acute gastric or duodenal ulcerations, which can fairly quickly develop and from which profuse bleeding can occur. About 2% of ICU patients will develop profuse bleeding from stress ulcers. The mortality rate in these cases is in the order of 60 to 70% depending on the underlying disease.

Generally speaking, most gastritis cases are mild and have a more chronic nature.

Depending on how the pathology is, the severity of symptoms will vary. Some patients with non-erosive gastritis may hardly feel any symptoms at all, maybe some nausea or discomfort in the mid upper abdomen. If the pathology involves deeper aspects of the mucosa of the stomach, vomiting and more severe abdominal cramps, some burning and a “hunger feeling” are also not unusual. Sometimes there might be pain irradiating into the mid chest area. The physician may assume this to be due to a heart attack. Particularly with biliary gastritis, where bile acids are flowing back into the stomach the symptoms can be fairly acute and vomiting occurs more frequently. 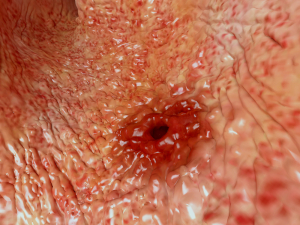 The doctor can diagnose mild cases on clinical grounds and treat according to the principles of the acid reflux chapter above. If H2-blockers do not give relief, there should be a high suspicion that perhaps H. pylori could be the reason for the gastritis.

It must be remembered that doing the urea breath test (see next chapter) checks out this possibility. If it is positive (H. pylori present), certainly a triple therapy program for one week would be successful in over 90% of the cases (see Ref. 1). This is a combination of amoxicillin and clarithromycin with a proton inhibitor. Alternatively, the physician may choose a combination of clarithromycin and metronidazole with a proton pump inhibitor.

If conventional treatment of gastritis fails, endoscopy is necessary

If this fails, or if the symptoms are worse, endoscopy (also called “gastroduodenoscopy”or “panendoscopy”) is necessary. Usually a gastroenterologist does this, but in smaller towns it will be a surgeon or internist. This allows the specialist to visually diagnose the condition. In this case biopsies can also establish the severity of the gastritis to rule out a malignancy, if there are suspicious areas. Additionally, the physician can send a sample of secretions for the rapid urease test for H. pylori.

The doctor orders the triple therapy when test results are positive. With atrophic gastritis the patient needs vitamin B12 injections regularly every month and the patient can learn how to do this him/herself. Likely, this will prevent the development of pernicious anemia. Gastric mucosa normally secretes a protein called intrinsic factor, which binds to the vitamin B12 of the food and the small bowel absorbs it. In contrast, patients with atrophic gastritis lack the intrinsic factor.  Notably this is the reason for giving vitamin B12 by injection. For the ordinary gastritis the physician prescribes the antacid medications cimetidine, ranitidine or the stronger antacid medicines (proton pump inhibitors) for a few weeks.

To put it differently, Dr. Murray explains that the cause of gastritis, gastric ulcer and duodenal ulcer is the breakdown of the mucosal barrier (Ref. 34, p.73-75). The symptomatic treatment of the H. pylori infection with triple therapy (2 antibiotics and a PPI) is the standard therapy. Nevertheless, in many cases it does not cure H. pylori. Moreover, some patients develop diarrhea from a Clostridium difficile super infection as a result of the antibiotics from the triple therapy. Subsequently they require even more expensive antibiotics for that condition. This only happens, when the physician treats only the symptoms, but not the cause.

To put it another way: the cause of gastritis and duodenal ulcers is a weakening of the lining in the stomach and the duodenum. This results in a breakdown of the mucous barrier. In some people dietary habits play a role, like too much cereal and wheat consumption with too little alkaline vegetables in the meals to neutralize the acid formation (see Ref.35 for more details).

However, when a patient swallows a simple licorice compound (DGL, which stands for deglycyrrhizinated licorice), the symptoms from gastritis, acid reflux, and ulcers in the stomach or duodenum disappear. DGL is available over-the-counter. It supports the lining of the stomach and duodenum and re-establishes the defense against the acidy milieu. Not only that, but after a few weeks of DGL treatment all of the findings on endoscopy, in this case inflammation and ulcerations disappeared. Dr. Murray states that he has not encountered a case of gastritis or ulcer that would not have responded.

Re-evaluating the causes of gastritis

It appears that the cause of gastritis and ulcers in the stomach and duodenum is notably not from too much acid. It is certainly not from H. pylori infection, which appears to just be a concomitant infection. But expressly it is due to a breakdown of the barrier in the lining of the stomach and duodenum, which nevertheless responds to DGL. Another key point is that you can buy DGL in the health food store. The dosage is two to three chewable tablets on an empty stomach three times per day. According to Ref. 34 it needs to be specifically taken for 8 to 16 weeks, after which there is a full therapeutic response. Pepto-Bismol is another coating substance that is available over the counter and works well for minor stomach upsets.