In general practice constipation is an important symptom that prompts patients to see their physician. There seems to be a lot of confusion in the general public about this topic. It starts by defining what a normal bowel movement is. There are enormous cultural differences. For instance, in Africa where the population eats on average a much larger amount of fiber, the bowel movements are much bulkier.

Sir Dr. Burkitt, the famous English surgeon, examined bowel movements (stools) of African tribes in comparison to his English countrymen and came to the conclusion that in the Western world we need to remedy our constipation problem and cancer of the colon problem by eating more fiber.

What we know now

He is still right: fiber is mainly treating the constipation (not preventing the cancer), but the chemicals that are also in the vegetables contain a multitude of natural anti-carcinogenic substances, which provide the powerful preventative action against colon cancer and many other cancers. Lycopene is one of these. Tomatoes and tomato products contain it.

Sir Dr. Burkitt’s observation that high bulk food (with vegetables and green leaves) prevents cancer is as valid today as it was in the early part of the 1900’s.

How often should we defecate?

Next there is the question how often we should defecate. In a country where high fiber intake is the norm a daily or twice daily bowel movement is normal. However, in the Western world in highly developed countries the norm may be a bowel movement every other day. However, I do believe that this is unhealthy and is likely the reason for a high colon cancer rate. The literature supports this (Ref.2). To answer this difficult question of what a normal bowel movement rate would be, the answer is likely once every day, but those who eat a lot of vegetables may often get a second bowel movement during the day due to the extra bulk. Gastroenterologists now feel that twice per day is likely better than once.

There are different types of constipation.

This is a condition where there is a sudden change from a normal bowel pattern to a bowel movement occurring with a 1 or 2 day delay.

There might be bloatedness, a sense of fullness in the abdomen, particularly in the left lower abdomen and occasionally sharp stinging pains. This could be an ominous sign of a partial closing down of the colon lumen by a tumor. But it could be harmless as the patient had become bedridden and there was less physical activity. A physician needs to examine a case like this. The health care professional heeds to rule out more serious problems like diverticulitis, head trauma or a spinal cord lesion. There can also be side effect of drugs (iron salts, pain pills, tranquilizers, sedatives).

Chronic constipation cases that start insidiously, but then remain despite taking a high fiber diet, make the doctor think about other underlying causes such as hypothyroidism (= low thyroid function) or metabolic causes such as hypercalcemia and uremia from early kidney failure.

We find that elderly people become too inactive. This lowers the natural peristalsis of the gut. This combined with poor eating habits and chewing problems because of poor teeth is often responsible for chronic constipation. Also the elderly often are on multiple drugs, all of which have a weak “anticholinergic” side effect, which translates into suppressing peristalsis chemically and resulting in constipation. Psychogenic factors and chronic depression as well as obsessive-compulsive behavior can also feed into constipation. It can lead to a hyper awareness of one’s own bowel pattern. This is unhealthy and requires counselling. But first the doctor rules out any serious cause of the chronic constipation.

Other tests by the physician

If the physician does not face chronic constipation, it can lead to impaction as shown on the image. 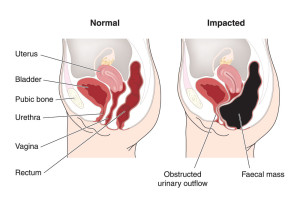 Above all, the physician needs to identify the cause of constipation. If he/she cannot identify a serious disease (cancer of the colon or rectum) and no metabolic disease is present that needs treatment, then the following guidelines would be reasonable.

A simple tool is an enema with lukewarm water (1500 ml or 50 fl.oz.) in a Faultless enema bag without any additives in it. The person who gets the enema needs to lay on the left side. This way the water can flow in easily. When entering the nozzle into the anal canal, do not force it. Instead use a bit of Vaseline ointment to facilitate entrance. The response usually comes within 5 to 10 minutes following the enema. It works by dilatation of the bowel wall, which leads to a reflex bowel contraction. This would be safe to take every day, but usually should not have to be taken more than two or three times per week even in chronic constipation.

Next, if this is not tolerated or does not appeal to the patient I would recommend a bulking agent such as psyllium (brand names: Prodiem Plain, Metamucil, Novo-Mucilax) and bran (Brand names: Kellogg’s All Bran and Post’s bran flakes). These are mild laxatives, which are safe to take every day and which will not make the patient hypokalemic.

Osmotic agent: One or two tablespoons of sorbitol as a 70% solution is a hyperosmotic solution, which stays in the gut and draws water by osmosis into the colon. The bulking effect creates peristalsis and the water retention makes the stool softer. It takes often 1 or two days to get the full effect. There can be transient abdominal cramps until the stool is passed. One variation of this theme is to give sorbitol in a mix with other osmotic agents as a micro-enema in the form of Microlax (from Pharmacia and Upjohn).

The “emergency break”: Occasionally all of the above is simply too weak. The constipated person normally is controlled with the above measures, simply could not go to the bathroom for several days. Bisacodyl (brand name: Dulcolax) and sennosides (brand names: Ex-lax Sugar Coated Pills and Senokot products) can be used on a one-time only basis. Increase your vegetable and fruit intake, cut down on refined foods, which are devoid of fiber.

I do not recommend any other products because they are expensive and not as effective. With mineral oil, for instance, there are dangers of aspiration with subsequent life threatening lipid pneumonia. Even with the suggestions above, one should always start on top and work with dietary changes first. It takes a few days to see the effect. Avoid the “emergency break” on a regular basis. This would be called laxative abuse and has devastating consequences as the body loses potassium and this in turn leads to secondary hyperaldosteronism (an increase of a mineralocorticoid hormone from the adrenal glands) and possible kidney damage (Bartter’s syndrome).

The key to remember is that laxatives are only occasional emergency breaks that should not be taken daily.

Because of its role in nutrient absorption and body detoxification the digestive system plays a direct role in overall health and wellness. When the colon is unclean, waste and toxins can become trapped. This places places an extra strain on the detoxification organs (kidneys, liver) and weakens the  immune system causing illness.

Remember: ” Do not abuse laxatives!”

Furthermore, when bisacodyl and sennosides are taken daily, they stop working after a few weeks. The body gets used to the medication. So by treating these laxatives like an “emergency break only”, the colon is responding to the medication when it is needed and all the other potential dangers like Bartter’s syndrome and hypokalemia are not a problem.

Here is a site that shows an image of how bowel movements form in the colon.