Parkinson’s disease, also known among the medical profession as “Parkinsonism” and in the public as “Parkinson disease” .

As a matter of fact, this disease is a degenerative condition of the basal ganglia (substantia nigra), which are on top of the brain stem, but lie deep in the center and at the bottom of the brain. They produce the brain hormone dopamine, which is essential to coordinate the smoothness and fluidity of movements in the body. In general, without the function of the basal ganglia muscle movements become jerky and there is a problem to adjust the body posture according to the latest position. It is almost as if a computer part in the brain machinery regarding movement is malfunctioning. As a result the muscle movements are slow and show a decrease, rigidity, a resting tremor and instability with regard to posture.

It affects about 0.4% of those older than 40 years, 1% of those older than 65 years and 4% of people older than 80 years. Most commonly it starts in the late 50’s. More recent research has shown that a dysfunction of the energy producing sub particles of the basal ganglia cells, namely the mitochondria, are the reason for the onset of Parkinson’s disease (Ref.6). This was first detected in families where genetic abnormalities of the DNA of the mitochondria were noted to have been transmitted along the maternal lineage rather than the ordinary Mendelian genetic transmission. However, the same researchers are now suggesting that secondary genetic damage of the mitochondria of the basal ganglia through substance abuse (alcohol, smoking etc.) and chronic exposure to air pollutants very likely is the reason that some people develop Parkinson’s disease, but others don’t.

The family doctor should send a patient with possible Parkinson’s disease to a neurologist for confirmation of the diagnosis. Also, the specialist knows the latest in the treatment of this disease.

There are a number of treatments available for Parkinson’s disease that help for a period of time. But the underlying pathological degenerative process of the basal ganglia will continue to progress.

The loss of these ganglia leads to a loss of the transmitter substance dopamine. Eventually the patient becomes more and more disabled and usually needs 24 hour nursing care in the final months or years. Treatment is directed at providing recovery of some of the loss of available dopamine, the brain neurotransmitter substance that is missing. This can be made more available through dopaminergic medication (see below), through stimulation of dopamine receptors and through inhibition of the enzyme that breaks down dopamine. Other means of improving Parkinson disease are stereotactic surgery as well as transplantation of fetal dopamine neurons. 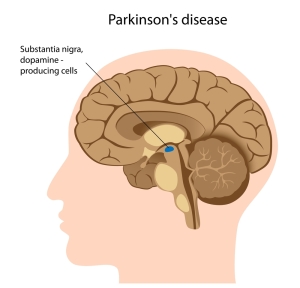 Researchers have transplanted fetal dopamine neurons into the brains of Parkinson’s disease patients (Ref.3). The surgery was a success in most cases.  But in 5% another surgery was necessary to correct the problem. The outcome was largely very encouraging. However, the long-term results will be there in a few years. Growth factors can help the stem cells obtained from the blood to survive better, so when these cultured stem cells are implanted they will have a higher survival rate. It appears that the donor’s own peripheral blood stem cells can be enriched and cultured, so that the patient’s own stem cells can be injected into the basal ganglia by a neurosurgeon. However, the logistics of this complicated treatment protocol have to be further evaluated in university hospital trials.

Here is a link to a site that discusses stem cell therapy for Parkinson’s disease further: Parkinson’s Disease.

Given the newer research findings mentioned above under “introduction” the authors of Ref.6 discuss the use of antioxidant vitamins to prevent mutations of the mitochondria of the basal ganglia cells. Vitamin C, E, beta carotene, and Co-Q-10 were mentioned as having been investigated for this purpose. Avoiding exposure to deleterious life styles and reducing the impact of pollution are powerful approaches of prevention. At the 2009 Anti-Aging Conference in Las Vegas Dr. Eric Braverman suggested the use of repeated Glutathione/Vit. C infusions to flush out mercury and other heavy metals like lead and arsenic from brain tissue. This may prevent Parkinson’s disease as well.

6. Shahul Hameed and Ging-Yuek Robin Hsiung: “The role of mitochondria in aging, neurodegenerative disease and future therapeutic options”. BC Medical J. 53, May 2011: 188-192.