Here is a dementia overview. Dementia can be caused by many underlying conditions, from trauma (perhaps best known from boxing or multiple head injuries with hockey), but also from genetic causes like in Huntington’s disease or Lewy body dementia.

With the latter there is a strong association with Parkinson’s disease (genetic tests reveal PARK11 gene abnormalities).

However, dementia is only a unifying presentation of lack of function of the brain with abstract reasoning missing (cognitive decline), reasoning and planning is also absent. This makes functioning with regard to daily activities impossible and patients with dementia invariably end up in a special care home.

There is an age related component: only 3% of people aged 65 to 74 have dementia, but over the age of 85 about 50% are afflicted with this condition.

The reason? There are multiple causes for this condition.

2. Infections like in AIDS dementia, and  Creutzfeldt-Jakob Disease can independently cause dementia. There are many other severe infections like tuberculosis, syphilis that can without treatment also lead to dementia  in the end stage. Fortunately in our time these diseases are spotted earlier and treated so we no longer see the end stages as in the past.

3. Vascular dementia is another form of dementia and here it is the combination of mini strokes leading to brain substance loss and nutritional deficiency due to circulation problems from severe hardening of the brain arteries. If the brain cells and the supportive glia cells do not get the required oxygen and nutrients they give up their function and we observe the symptoms of dementia. 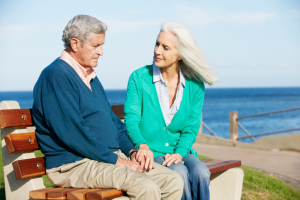 Even though I described the causes of dementia in the various links to this page as if they would be separate, quite often there can be mixed patterns of dementia where several causes work together in diminishing brain function. This is particularly true in the aging brain.

4. Dementia can also be caused from a lack of vitamin B12. In older age the absorption of vitamin B12 can be a problem because of the lack of the so-called intrinsic factor from the stomach. Read more information about this in the following blog.

A study that followed aging persons for 4 years and tested cognitive function showed that those who took regular, high enough doses of vitamin D3 were relatively protected from cognitive decline. Unfortunately, 68% of subjects in that study were found to be vitamin D3 deficient. Read the details here.

The other big factor for prevention is regular exercise: http://www.askdrray.com/regular-exercise-will-delay-onset-of-alzheimers-or-dementia/