The symptom of obesity is easily measurable, but the history of binge eating may be concealed, although a relative who accompanies the patient may volunteer this, if the patient does not.

There are elaborate questionnaires that can be used to quantitate the symptoms of overeating and binging. It also helps in assessing the severity of the binge eating disorder. In Ref.12 such questionnaires have been used as a predictor to the outcome of treatment. This study shows that testing criteria at the outset were effective in evaluating the severity of the binge eating disorder and the tests also predicted the success rate of the treatment program. This way the physician can predict whether a combination of treatment modalities should be employed or whether a simple cognitive behavior therapy would suffice.

PET scanning (=positive emission tomography) is expensive and is currently only used as a research tool or in life threatening clinical situations. In Ref.13 this tool has been used to document that in a group of women with binge eating disorder there was an altered blood flow pattern in the brain when their appetite was stimulated by images of food. There was more blood perfusion in the left hemisphere and the left frontal lobe of this group compared to normal-weight controls having normal eating habits. This observation may have far reaching therapeutic significance for future treatment approaches. 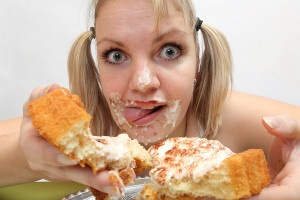 We know from literature reviews what the natural history of the disease would be. For instance, Ref. 14 describes an Oxford University study by Fairburn et al., where 150 patients with either bulimia nervosa or binge eating disorder were followed over a 5-year period without intervention. Patients with bulimia nervosa were shown to have a poor prognosis with about 40% still having an eating disorder or obesity after 5 years. In contrast the binge eating disorder group showed a much better prognosis with a spontaneous cure rate of 80%.

A New York study (Ref. 15) showed that the success rate is higher when a combination therapy program is chosen where fluoxetine (brand name: Prozac) is used to treat depression and a psychiatric counseling program is employed to change the long-term attitude towards food and life in general. This holistic approach appeals both to the patient and the treating physician and when combined with methods as mentioned in Ref. 12 it is possible to monitor the treatment success on an ongoing basis.

Another method, namely the use of self hypnosis, can be incorporated with such a combination treatment approach. Ref. 15 makes the point that an open ended approach is better for the long-term success, which is the ultimate goal. The physician hopes that a high percentage of the patients will gradually change their behavior pattern towards food, become physically more active and change emotionally by conquering depression and low self esteem. This is a slow process, and it takes a period of trials and errors coupled with determination and the human factor to truly change body image and eating patterns. There are new approaches and new weight loss medications, which will become part of a comprehensive treatment program such as outlined above. One such newer agent is outlined in Ref.16.

This paper shows that the anticonvulsant medication topiramate (brand name: Topamax) was effective in reducing weight in a group of patients with binge eating disorder at a dosage of 400 to 600 mg daily. You may want to discuss this with your doctor. If this medication is used, one has to slowly start the dose and work up to the above mentioned maintenance dose and at the end of treatment slowly wean the medication to avoid seizures. There are a number of neurological side-effects, which your doctor could explain to you. However, any treatment decisions are strictly between you and your doctor. Just because one study says that a new treatment modality is effective does not mean that this would be the best treatment in your case.