In 2009 there were cases of swine flu, which had the constellation H1N1  that originated from Mexico where the mortality from it was in the 30% category.

The first cases likely occurred in mid March 2009, but were only confirmed in a laboratory in California as H1N1 in early April 2009 when a returning visitor from Mexico turned ill.

According to this Lancet article (thanks to www.thelancet.com for this link) this strain of swine flu is actually a hybrid of human/avian/pig influenza. This means there is no species barrier (the virus is adapted to humans, pigs and birds) and it can travel around the world easier. However, it seems much less deadly than the feared avian flu that never materialized. The good news is that because of preparations for the bird flu in the recent past countries around the world take this present swine flu seriously and use isolation methods that have proven to be effective in the past against SARS. The other good news is that the present swine flu strain H1N1 is sensitive to two antivirals, one of them Tamiflu. It is unlikely that there will be a vaccine available in the near future as it will take months to manufacture enough vaccine doses for millions or billions to be vaccinated.

Here are some swine flu related questions (thanks to www.seattlepi.com for this link) answered by an expert.

What can I do to protect myself?

· Wash your hands frequently and thoroughly, using soap and warm water, or use hand sanitizer
· Avoid close contact with those who are ill
· Keep your hands and fingers away from your eyes, nose, and mouth
· If you’re ill, stay home
· Cover your nose and mouth with a tissue when you sneeze. Throw the tissue in the trash after you use it. When you cough, do so into your sleeve to avoid spreading the flu bug.
· If you experience severe flu-like symptoms, talk to a health professional.

Are all cases of human swine influenza severe? 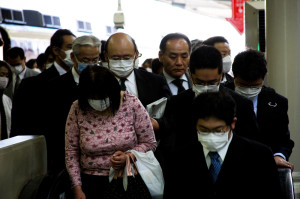 I have travelled to Mexico, California, or Texas recently, and I’m feeling sick, what should I do?

If you become sick with severe flu-like symptoms, especially respiratory symptoms like a fever and cough or difficulty breathing, stay home from work, call your doctor, and tell your health professional that you’ve recently travelled to those areas. If Tamiflu (=oseltamivir) or Relenza (=zanamivir) is taken in the first two days of the flu it will stop the flu from escalating (see Interim Guidance by CDC , archived; thanks to www.cdc.gov for this link).

Here is a summary of flu symptoms as found in three common respiratory tract viral illnesses.

How to Distinguish Between COLD, SEASONAL FLU and H1N1 Flu Symptoms

Here are some useful links:

· The Public Health Agency of Canada
· The World Health Organization
· Centers for disease control and prevention: seasonal flu
· Tips from the Government of Canada on how to fight the flu
· Travel notices and advisories