Tuberculosis (TB) is a potentially debilitating respiratory disease, which if not treated can become systemic and is a serious threat to a person’s life.

50% of infected people will die within 5 years, if tuberculosis is untreated (Ref.1, p.521) and most of them will die within 18 months. The good news is that TB can be treated successfully with a combination of drugs, but it takes long, is cumbersome and needs close supervision by an infection specialist.

The bad news is that new resistant strains of TB have developed in the past few years in people with a paralyzed immune system such as AIDS, or people with cancer and leukemia.

Natural progression of the disease

In industrialized countries transmission from person to person usually occurs via micro droplets in the air from a person that has tuberculosis of the lungs or the larynx and who coughs the bacteria into the environment. In this way Mycobacterium tuberculosis can stay in the air for several hours and thus increase the probability of spread from person to person (Ref. 10, p.1193).

The three stages of tuberculosis (TB)

1. Primary infection within the lung tissue: this is the usual way how tuberculosis starts.

2. Latent or dormant stage of tuberculosis: often tuberculosis goes “underground”, on the surface not progressing for up to 1 or 2 years, but the TB bacterium is live wherever it incubates and there are silent tissue reactions.

3. Active tuberculosis in various organ systems: As shown in the next table, tuberculosis tends to express itself in 11 different organ systems masquerading as distinct clinical entities despite the same underlying TB pathogen. 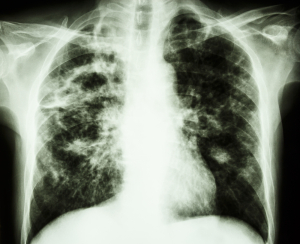 It may then lay dormant (latent or dormant stage of TB) and take several months or 1 to 2 years before it gets reactivated. All along the TB bacterium is alive, but surrounded by granulation tissue (one of the histological markers, with live tuberculosis bacteria in the center).When the bacterium is inhaled, it forms the primary infection within the lung tissue, which may go undetected, if no cough or other symptoms develop. On other occasions TB might be diagnosed at this stage and treated very effectively.

In primary infection with TB (the first stage of TB) the patient just does not feel well. There likely is a cough for a few weeks, but a smoker might think that it is just a smoker’s cough, whereas a non smoker may blame it on a “regular cold or virus”. In primary TB infection there is formation of granular tissue around the TB bacteria as a result of an inflammatory reaction.

This is called a “caseous nidus” and this can rupture open and get coughed up. The result is that the patient may see some cottage cheese like material mixed into the phlegm that was coughed up. The main symptom with tuberculosis of the lung is a chronic cough. At this point in time there would be subtle X-ray changes. Here is an example of an 18-year old boy whose chest radiograph shows patchy consolidation, nodules and cavities (arrows) in both upper lung zones. In adults there would be nodular scars on the upper lung fields, called “Simon foci“, from which the TB continues in the later stages. In children the initial nodular changes are in the middle and lower lobes of the lungs, which in that age group are better perfused. Children also get a prominent hilar lymph gland reaction as well as more commonly pleural effusions, which shows up on X-rays. After the dormant stage there is a sudden occurrence where TB either flares up in the lungs or as tuberculous meningitis as a neurological disease. TB is a disease that appears in various disguises. It can present as various system diseases, as already mentioned above and depicted below. For instance, with miliary tuberculosis there would be the symptoms of a low grade fever, enlarged lymph glands, an enlarged liver, an enlarged spleen and often adrenal insufficiency.

Signs and symptoms as well as treatment are very much determined by the anatomical location of TB. I will comment in the following what treatments are used for the various forms of tuberculosis.

When the tests are positive for TB, this condition is treated for 3 months with a combination of rifampin, clarithromycin and ethambutol. More serious invasive cases are treated with 4 to 6 drug combinations simultaneously. In the past partial lung resections were often done, which is now reserved for the resistant cases in a young patient who is otherwise healthy.

This more rare presentation of TB originates usually through spread from the perihilar lymph glands that penetrate the pericardial sac or from a tuberculous pleuritis (effusion within the chest cavity from TB of the lungs). Clinically there are signs of cardiac failure with neck vein distension and shortness of breath. X-rays show an enlarged heart and pericardial fluid. A positive tuberculin skin test in combination with the above clinical signs makes the diagnosis very likely and warrants antituberculous multi-drug therapy. A good response to this treatment confirms the specific diagnosis of tuberculous pericarditis and prevents potentially life threatening diagnostic procedures such as surgical drainage of the cardiac effusion and diagnostic biopsy of the pericardium.

The liver is often secondarily infected with patients with advanced lung TB or in patients with miliary TB. The symptoms likely will be due to the underlying other forms of tuberculosis. However, in the workup the patient is being noticed to be jaundiced and the liver enzymes are elevated indicating that the TB has spread into the liver. As invariably live TB is easily curable when the primary TB is being treated, the diagnosis of liver TB is only important to note in the sense that two commonly used antituberculous drugs, namely isoniazid and rifampin, are hepatotoxic and should be avoided initially in these situations. Instead the clinician will use a combination, which includes only isoniazid (not rifampin), so that this can be stopped, if there is a worsening of the liver condition. Newer antituberculous drugs can be utilized that are not as hard on the liver, but are more expensive.

As the gastrointestinal tract is relatively immune from TB bacteria, it takes enormous amounts of the bacteria such as in cavitary lung TB to infect the gut. In this case the patient coughs up TB bacteria and then swallows them, eventually invading the lining of the gastrointestinal tract. In development countries where milk is not pasteurized, bovine TB is commonly infecting the gastrointestinal tract. Ulcers of the mouth and pharynx as well as tuberculous lesions in the small intestine are common. An inflammatory mass may present like an intestinal cancer lesion, but when laparotomy is done, it is apparent that this is tuberculous in nature. Therapy consists of resection of the affected bowel area in combination with multi-drug antituberculous therapy.

TB of wounds and skin

TB disease of the skin and of wounds is usually found in patients who have a weakened immune system, because of AIDS where the cell mediated immune system is paralyzed through the AIDS virus, or in patients with hairy cell leukemia where the leukemia has destroyed the cell mediated immunity. Also, in patients who have received organ transplantation and who are on maintenance immunosuppressive therapy skin infestation with a number of TB related Mycobacteria strains are occasionally found. After identification of the causing agent combination antituberculous drug therapy is given for 3 to 6 months.