Diphtheria is an acute bacterial disease, which involves the throat, the tonsils, the nose and trachea.

The diphtheria bacteria eve3n infects skin wounds and sometimes the vagina and the conjunctiva of the eyes. There is an incubation time of 1 to 4 days, after which there is a prodromal period of 12 to 24 hours.

Diphtheria starts with a sore throat, which initially may be mild. The patient complains of pain with swallowing, is nauseous and has a low-grade fever. There is an increase of the heart rate and chills and headaches set in. There is a typical gray membrane that develops as a result of the infection of the tonsils or the soft palate. It is fibrinous and adheres firmly to the underlying tissues. It tends to be asymmetrical (worse on one side), which is typical for diphtheria. The damage to the person affected with diphtheria comes from the toxin that the bacteria produce. The name of the bacterium is Corynebacterium diphtheriae.

Three subtypes exist (gravis, mitis or intermedius). The microbiologist determines by culture appearance what subtype the patient has. This is also important to investigate when there is an outbreak of the disease. The toxin produces a myocarditis, heart block, arrhythmias and congestive heart failure, which can be the cause of death in 5% to 10% of patients with diphtheria. Diphtheria may present atypically with an infection of skin at the extremities. Or it may present as an otitis media, as a pussy discharge from an eye with acute conjunctivitis or as pussy discharge with a vulvovaginitis. The lab technician isolates diphtheria from the pus of these presentations. Wherever diphtheria bacteria grow, they produce the same toxin and further treatment is identical.

Paralysis of the diaphragm

Before the DPT vaccination program paralysis of the diaphragm was a feared complication, which makes breathing difficult or impossible, necessitating a ventilator. In non-vaccinated children who get diphtheria paralysis of the diaphragm is what the treating physician has to watch out for. This dreaded complication can occur up to 6 weeks from the beginning of diphtheria. A child may have to be hospitalized for a full 6 weeks to monitor for breathing problems, even if the sore throat and cough have long subsided.

The physician makes the diagnosis clinically and takes all the culture samples to send in for laboratory confirmation. However, treatment is given right away without awaiting the culture reports. Any delay in treatment would only worsen the chance of survival as the toxin is relentless in causing damage to the heart and nervous system. The treatment consists of antitoxin, which is given intravenously or intramuscularly at dosages of 40,000 units for mild cases, 80,000 units for moderate cases and 120,000 units for severe cases. This inactivates toxin that is newly released, but toxin bound to the heart or nervous tissue can no longer be inactivated.

In addition, the physician gives penicillin G (600,000) units intramuscularly every 12 hours for 10 days. Alternatively, the health care provider may give erythromycin orally for 14 days to eradicate the diphtheria bacteria.  This also eradicates any other streptococcus that may be there concomitantly. The physician updates the active immunization with the DPT vaccine to prevent future outbreaks of diphtheria (Ref. 3, p.2304). 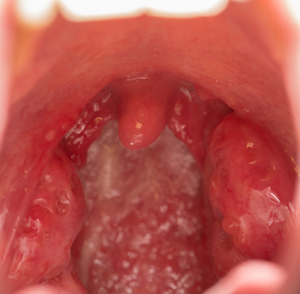 Between 1990 and 1995 there was a major outbreak of diphtheria in the former Soviet Union and Mongolia, because there were cut backs in the preventative vaccination programs. 150,000 diphtheria cases were reported, of which 5,000 died. In a similar outbreak in Ecuador in 1993/94 200 cases occurred, half of which were in children less than 15 years of age. In both situations mass DPT vaccine immunization programs contained the epidemic. The problem is that society is getting too lax about immunization schedules. The anti-vaccine movement has led to some regions being under immunized because people believed that DPT injections may be “harmful”. This is a tragedy as DPT vaccines are one of the safest vaccines having saved millions of people’s lives. However, it is important that 85% or more of the population get vaccinated to interrupt the infectious chain (Ref. 1, p.167).