There are two forms of bronchitis, acute bronchitis and chronic bronchitis.

Acute bronchitis is a common occurrence in the winter months and is associated with a number of viruses and bacteria that are spread among the population by droplet infection.

It tends to develop after the common cold, another infection of the upper airways or as part of a flu of the larynx, trachea and bronchial tubes.

There are a number of viruses that affect the bronchial tubes such as influenza A and B infections, adenoviruses, corona virus, parainfluenza virus, coxsackievirus A21, respiratory syncytial virus(RSV), but also the measles and rubella virus. Other infectious agents that cause bronchitis are Bordetella pertussis (causing whooping cough), Mycoplasma pneumoniae and Chlamydia pneumoniae. There are risk factors that make a person more prone to getting bronchitis.

For instance exposure to air pollution, to cigarette smoke, to airway irritants such as sulfur dioxide, nitrogen oxide, ozone, organic solvents, ammonia, acid fumes and dust are all known to make a person more prone to develop an infection with one of the mentioned infectious agents. Patients who already have chronic obstructive pulmonary disease or patients with inhalant allergies, sinus problems, or children with enlarged tonsils or adenoids are more prone to develop bronchitis as well. 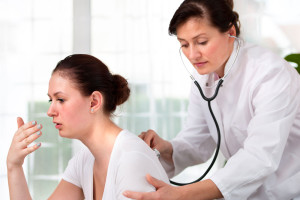 Bronchitis leads to a cough

The person who develops bronchitis usually has a cold first. But after a few days there is the sudden onset of a cough, which signals that the bronchial tube lining is inflamed (thanks to www.humanillnesses.com for this image), which constricts the airways. This leads to an irritation of the nerve endings in the mucous membrane lining of the bronchial tubes, which in turn leads to the chronic cough. In the beginning it usually is a dry cough, but a few days later it turns into a productive cough with copious secretions being coughed up (called “phlegm” or “sputum”). There can be a central chest wall pain. A moderate fever may last for up to 5 days, if it persists longer one has to think of a possible developing pneumonia. The chronic cough, however, can lasts for several weeks, even up to 2 months.

The physician will initially likely concentrate on an examination of the chest. With the stethoscope there are typical sounds audible, called rhonchi, wheezes and crackles. But there is no bronchophonia, which would indicate pneumonia. To be certain there is no pneumonia the physician may on occasion order a chest X-ray. A sputum for culture of bacteria might be ordered occasionally.

When a lot of pussy sputum is produced the physician likely will order an antibiotic such as amoxicillin or tetracycline. Another common antibiotic is trimethoprim-sulfamethoxazole (brand name: Bactrim or Septra). Children should not be given tetracycline as it would stain their teeth permanently (Ref. 7, p. 583).

When acute bronchitis persists and the cough develops into a chronic cough of 3 months duration this would then be termed “chronic bronchitis”. Equally, if recurrent bouts of bronchitis become more frequent with at least two such bouts lasting three month occurring in two successive years, this also would be considered chronic bronchitis. Such recurrent infections tend to lead to scarring of the bronchial tubes with narrowing of the smaller bronchioles and occasionally in time also the development of bronchiectasis. This has been dealt with in the chapter of lung diseases under chronic obstructive pulmonary diseases (COPD).