The “cold”  or “common cold” is an acute viral infection of the mucous membranes of the nose, the sinuses, the throat and larynx.

Sometimes the infection goes lower into the trachea and bronchial tubes. It is caused by a number of viruses, although clinically they appear to be the same. In about 1/3 of cases viruses can be isolated by special detection methods (mainly for research purposes).

Common viruses are rhinoviruses, which are found in about 30%, coronaviruses in 15% and influenza virus in about 15% as well. Other viruses are parainfluenza virus, respiratory syncytial virus (RSV) and adenovirus. The most common mode of transmission is airborne droplet infection, which is inhaled from an infected person. Indirect transmission via contamination of hands is also an important mode of transmission from touching nasal or throat discharges and bringing this in contact with the mucous membranes of eyes or nose. Incubation time is about 48 hours, but can be as little as 12 hours and as long as 5 days (Ref. 1, p.426). 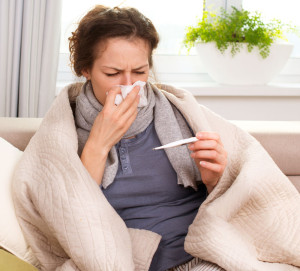 Spread can be prevented by frequent hand washing and covering of the mouth when coughing. Crowds should be avoided. Smoking should be avoided, particularly in a house where children would be exposed to secondary smoke. Children who are exposed to secondary smoke are very prone to developing pneumonia. Humid air in the room will make the person feel better. Alternatively this can be achieved by inhaling hot steam for 10 minutes from a pot with water that had just been brought to a boil (watch and prevent burns) while covering the head with a towel. Two steam inhalations per day give a lot of relief.

Rest, extra sleep and the use of Otrivin as nose drops every 4 to 6 hours to keep the nasal and sinus passages open are also helpful. If fever is present, acetaminophen tablets or syrup will help to reduce it. In children ASA is not advisable as with influenza there is a risk of developing Reye’s Syndrome. (thanks to en.wikipedia.org for this link). People with allergies might benefit from antihistamines to dry up the mucous membranes as they react with more than average mucous production with a cold.

The common cold is usually self limiting as the body’s immune system will produce antibodies that will appear in the blood stream 4 to 5 days after the initial infection. Antibiotics are not recommended as they do not change he natural course of events. Unfortunately there are more than 100 different substrains of common cold viruses, so that it takes a lifetime to become more immune to most of them. Children are not as protected as their immune system has to start building up an arsenal of antibodies with every cold they get. Up-to-date vaccinations help with the building up of an arsenal of pre-existing pool of antibodies. Older people lose some of the immune memory cells, which results in a weakened immune system, making them also more vulnerable to the common cold and other viral illnesses.