Symptoms of pneumonia involve mostly an upper airway infection first. There is a sudden chill followed by a fever.

There might be pain with breathing (from an inflammation of the surface of the affected lung, called “pleurisy”). A cough develops and in the next few days secretions are coughed up, called “sputum”.

This may have a yellow or greenish color (depending on which organism produces it). The patient may have labored breathing and breathe faster than normal. On examination the physician can hear an abnormal bronchial breath sound (called “bronchophonia”). There may be dullness on percussing the chest wall from an underlying pleural effusion. This also shows up on chest X-rays as does the pneumonic infiltrate.

There are four major phases of a lobar pneumonia

These terms originated historically in the pathology departments of university hospitals.

When physicians did autopsies on people who had died from pneumonia, they found that during an epidemic the lungs of diseased people looked different, although they were convinced that it was the same disease that killed everybody. 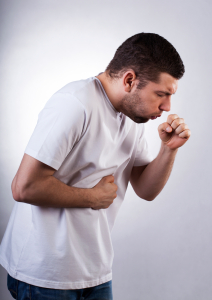 They described the second phase as red hepatization as it looked like a liver (“hepar” = liver). When the inflammatory cells attack in the third phase of a pneumonia, the lung tissue looks grey on inspection (gray hepatization). Without complication it resolves later, but would often leave some scarring behind, if untreated. Other complications are spread of bacteria, fungi or viruses into the remainder of the body (septicemia) or into specific locations such as heart valves (endocarditis), joints (septic arthritis), abdominal cavity (peritonitis), pleural cavity (empyema) or into the central nervous system (meningitis, brain abscess).